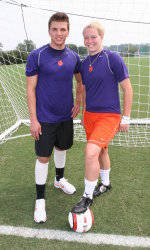 Clemson men’s goalkeeper Phil Marfuggi and Lady Tiger goalkeeper Ashley Phillips were both named preseason All-Americans by Soccer America magazine entering the 2006 season. Both teams will open their respective seasons Friday night as the Clemson men will play at South Carolina and the Lady Tigers will play host to Alabama-Birmingham at Historic Riggs Field.

The Clemson men’s soccer program has a strong goalkeeping tradition. In the last nine years, the Tigers have had four All-American goalkeepers: Matt Jordan, 1997: Josh Campbell, 1998: Phil Marfuggi, 2005. Jaro Zawislan (1990-93) is Clemson’s leader for most career saves with 446 and was an academic All-American. Jamie Swanner, who played in 1982-83, was named the National Goalkeeper of the Year in 1983 and was an All-American.