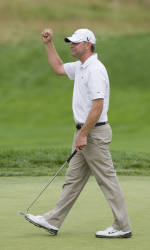 Clemson, SC – Former Clemson All-American Lucas Glover fired a second round 66 and captured the 27th annual PGA Grand Slam of Golf on Wednesday afternoon. The event was played at the Port Royal Golf Club in Bermuda. The event was a 36-hole competition between the four Major Champions of 2009.

Glover, who became the first Clemson graduate to win a Major golf championship when he won the 2009 US Open at Bethpage Black in June, had rounds of 65-66 for an 11 under par 131 total to win by five shots over 2009 Masters Champion Angel Cabrera. Cabrera had rounds of 70-66 to finish at six under par.

Glover had a two-shot lead over Cink entering the final round after his opening 65. But, Cink took the lead seven holes in when he started four under par compared to Glover’s one-under par. Glover made a bogey on the par four fourth hole, but responded with five birdies over his next seven holes. He went from one down to five up in a matter of six holes and coasted to the victory. Glover finished the day with seven birdies and two bogeys in carding a five under par 71.

The victory concludes Glover’s competition for 2009. He will be honored for his US Open Championship prior to the Clemson vs. Florida State football game at Death Valley on November 7.