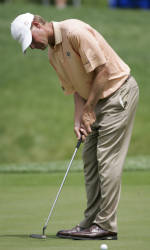 Glover to Play in British Open

Clemson, SC – Former Clemson All-American Lucas Glover will compete in the 2008 British Open at Royal Birkdale in Lancashire, United Kingdom this weekend. Glover qualified for the British Open with his selection to the 2007 United States President’s Cup team.

This will be Glover’s third consecutive British Open appearance, more than any other former golfer. He missed the cut after rounds of 72-73 at Royal Liverpool in 2006 and finished 27th last year at Carnoustie with a two over par 286 score. That was Glover’s second best finish in a Major. He was 20th at the 2007 Masters. This will be Glover’s 11th career Major, but his first this year.

This year’s British Open will be held at the par 71 Royal Birkdale course that is 7180 yards in length. Glover will play with Craig Parry and Simon Dyson in the first two rounds. He will be in the first group that tees off on Thursday at 6:30 AM in the United Kingdom, 1:30 AM in the Eastern time zone. He has an 11:41 AM start from the second round on Friday, local time, 6:41 in the Eastern time zone. He will start at the first hole each day.

So far this year, Glover has played 20 events on the PGA Tour and has made 14 cuts. He has six top 25 finishes, including two top 10s. He is 86th on the money list. His best finish of the year was at the Buick Open in Michigan two weeks ago when he was seventh.