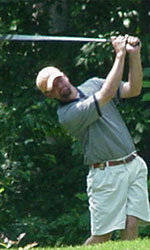 Glover to Compete in British Open

Clemson, SC- Former Clemson All-American Lucas Glover will compete in the British Open at Royal Liverpool in Hoylake, England this weekend. Glover is just the third golfer with ties to Clemson to play in the British Open, the first to do it as a professional.

Glover, an All-American at Clemson in 1999-00-01, will start his play on Thursday at 12:58 PM local time and is paired with Peter Lonard and Graeme McDowell. The same group will start play on Friday at 7:47 PM in England.

This is the first British Open played at Royal Liverpool since 1967 when Roberto de Vicenzo won the championship. The course is a par 72 that is played at 7,258 yards.

Glover is currently 23rd on the PGA Tour money list with over $1.6 million in earnings. He is also 10th on the Ryder Cup points list for the United States team.

Television coverage of the 2006 British Open will be extensive. Fans can follow Glover and other 155 competitors according to the following schedule: