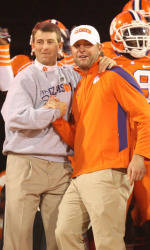 Glover Runs Down the Hill

CLEMSON, SC – Former Clemson All-American and 2009 US Open Champion Lucas Glover was honored prior to the Clemson vs. Florida State football game on Saturday, November 7. Glover dotted the “I” in “Tigers” during the pregame ceremonies, then had the opportunity to do something few Clemson professional athletes get to experience.

The day after Glover won the United States Open (in June) he received a text message from Clemson Head Coach Dabo Swinney. In the text he invited him to run down the hill with the team prior to a game in 2009. Glover took him up on the idea and he was with Swinney at the top of the hill for the Florida State game.

He became the first Clemson graduate who is a professional athlete in a sport other than football to run down the hill with the team.

Glover negotiated the hill with no trouble. He could have gotten some pointers from his grandfather, Dick Hendley, who was a Clemson Hall of Fame blocking back under Frank Howard from 1947-50. Hendley was with Glover and the rest of the family when he dotted the “I” in Tigers prior to the game.

Glover is also in the Hall of Fame and the are the only grandfather-grandson combination in the Clemson Hall of Fame.

“I just told Lucas before the game, he better keep up,” said Clemson Head Coach Dabo Swinney. “It was great to have Lucas with us. Winning the US Open, it doesn’t get much better than that.””

Glover was an All-American on the Clemson golf team between 1998-2001. He worked on his degree during the season and in the offseason and graduated in 2005.

Video: Running Down the Hill