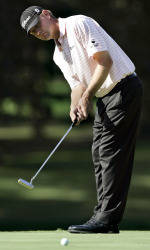 Glover Makes Cut at The Masters

Clemson, SC – Former Clemson All-American Lucas Glover shot a one-under-par 71 on Friday and made the 36-hole cut at the 2007 The Masters golf tournament in Augusta, GA. Glover is the first golfer with Clemson ties to make the cut at the Masters since Jonathan Byrd in 2003.

Glover was in eighth place in the field of 96 golfers at the end of the round.

Glover’s round of 71 on Friday included a double bogey, an eagle, a bogey and two birdies. The native of Greenville started his round by scoring six straight pars. He then double bogeyed the par four seventh hole, but came back with a birdie on the par five eighth.

Glover finished the front nine with a par on the ninth hole to score a one-over-par 37. The former Wade Hampton High School product then began the back nine with a birdie on the difficult par four 10th hole for the second straight day. The 11th hole was nightmare for Glover in the first round when he had a double bogey, but he scored a par on 11 on Friday.

Glover completed Amen Corner with two more pars, then made an eagle on the par five 15th to get to two-under-par for the day and even par for the day. After scoring pars at 16 and 17, Glover bogeyed the 18th for the second straight day.

“I Drove it better today and didn’t have any three-putts,” said Glover after his round on Friday. “That hurt me yesterday. I hit more fairways today and made a long putt on 15 (for eagle).

Glover stands at 145, one-over-par for the first two rounds. He had a 74 in the first round. It was a six-stroke improvement for Glover in much more difficult scoring conditions compared to last year when he had rounds of 73-78 and missed the cut.

For the first two rounds combined, Glover has reached 22 of 36 greens in regulation and has hit the fairway in 18 of 28 possible holes. He has taken 56 putts and has an average driving distance of 284.3 yards. He has six birdies, five bogeys, two double bogeys and an eagle through his first 36 holes.

Glover is the fifth golfer with ties to Clemson to make the cut at The Masters. Chris Patton, a senior at Clemson in 1990, made the cut and finished 39th. He was the low amateur of the field that year. Dillard Pruitt finished 13th in 1992 when he shot a six-under par 282, the best score ever recorded by a former Tiger at The Masters.

Clarence Rose made the cut in 1997 and finished 43rd at 301. Byrd was the last former Tiger to make the cut in 2003. He finished at 288, good enough for eighth place. That is the best finish every by a former Clemson golfer in a major, never mind just the Masters.

Glover’s one-under par 71 is the best round by a former Clemson golfer since Jonathan Byrd had a 71 in the third round in 2003. The low score by a former Tiger at the Masters for a single round is a 68 by Dillard Pruitt in the second round in 1992.