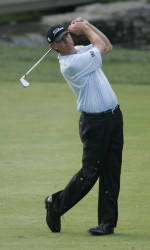 Clemson, SC-Former Clemson All-American Lucas Glover has a one-shot lead after two rounds of the Verizon Heritage PGA Tour Event at Harbour Town Golf Links in Hilton Head, SC. Glover shot his second consecutive round of five-under-par 66 on Friday morning to hold a one-shot lead over Boo Weekley, who shot a 64 on Friday.

Glover started his Friday round with a bogey on the 10th hole, his first hole of the day. But, he made birdies on the 15th and 17th holes to finish his first nine in one-under par. He then made birdies on the first, second and fourth holes, and finished with a birdie on the ninth to shoot a four under-par 32 on the front side.

Glover is playing in his 10th event of the year and he has now made eight cuts. He has two top 25 finishes this year and ranked 116th on the money list. He has not won a tournament since he captured the Funai Classic in Orlando in 2005.