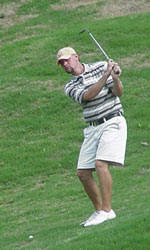 Former Clemson All-American and Greenville, SC native Lucas Glover fired a career best 269 for his four rounds and finished sixth at the Nationwide Tour’s Chattanooga Classic. The 2001 Clemson All-American shot an eight-under-par 64 on Sunday, a round that included 10 birdies. Jason Bohn won the tournament with a 23-under-par 265.

Glover was a career best 19-under-par for the four days after rounds of 70-69-66-64. Glover birdied the last four holes and finished the weekend with a tournament best 28 birdies. He won $14,000 and went over the $100,000 mark for the year. He is currently ranked 21st on the Nationwide Tour money list. The top 20 money leaders will receive a PGA Tour card for 2004 and will not have to participate in Qualifying School.

Glover has now made the cut in 11 of his last 12 events. Sunday’s finish was his fifth top 10 finish this year.

Glover was one of four former Tigers to make the cut at the Chattanooga Classic. Kevin Johnson, a three-time All-American between 1985-89 finished 12th with a 271 score, 17 under par. He had rounds of 66-69-68-68 and is now 25th on the money list. Tommy Biershenk, who led the tournament after two rounds at 13-under-par, played the last 36 holes in even par and his 275 score was good enough for 26th. Charles Warren, the only Clemson golfer to win the NCAA individual championship, finished 57th with a 281 score. Warren is now 30th on the money list.