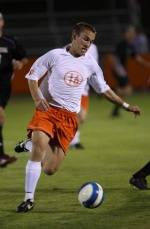 Georgia Southern improves to 1-1 on the year, while Clemson falls to 1-2 this season. A crowd of 5,950 fans were on hand at Historic Riggs Field.

Georgia Southern scored first at the 6:18 mark in the game. Jon Cox sent a pass over his head with a backward kick and sprung Daniel Smith loose on a breakaway. Smith scored from six yards out.

The Eagles went ahead 2-1 when Daniel Smith scored in the 30th minute. Fredrik Langseth sent a pass from the back to Jon Cox. Cox again sent a pass that created a breakaway opportunity for Smith. Smith sent a shot from night yards out into the goal for his second goal of the evening.

“I felt like we came out better tonight in the first half,” said Clemson Head Coach Trevor Adair. We got behind and had to chase the game all night. We have done this for three games and it takes a lot out of us. There’s nothing left at the end. We are not playing as a team, but playing as individuals. We have a lot of things to fix and we will work hard to fix them. We had a large crowd tonight and I really appreciated the support by our fans.”

Clemson will play host to Radford on Sunday afternoon at 2:00 p.m. in the Tigers’ next action.