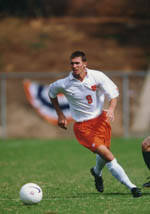 ORLANDO, FL – Clemson soccer player Ian Fuller was drafted in the second round of the Major League Soccer draft held Sunday at the All-Star Cafe at Disney’s Wide World of Sports Complex in Orlando, Florida, the six-round SuperDraft featured the selection of 66 players from the college and professional ranks. Major League Soccer’s seventh season opens on Saturday, March 23 as the Columbus Crew battle the Chicago Fire live on ABC Sports at 4:00 p.m. ET.

Fuller was selected as the 21st pick overall by the New England Revolution. Fuller a native of Portland, OR, was a senior for the Tigers in the 2001 season. He led Clemson with 11 goals and eight assists for 30 points as a senior. He was named NSCAA All-South, and was named the ACC Tournament’s MVP as Clemson won the ACC Tournament last season.