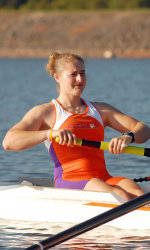 The Collegiate Rowing Coaches Association (CRCA) announced its list of National Scholar Athletes for the 2007 season on Tuesday. The award recognizes student-athletes with a 3.5 cumulative GPA or higher that competed in 75 percent of her team’s 2007 spring races. Also, the student-athletes must be upperclassmen (2nd, 3rd, or 4th year) in terms of eligibility and their head coaches must be good standing members of the CRCA.

Five rowers from Clemson earned repeat honors as National Scholar Athletes, including 2005 winner Ford Heiner (Marketing), Lizzy Jennings (Political Science), and Suzanne Van Fleet (Early Childhood Education) all earned the honor last season. All four were also Academic All-ACC in 2006. This season, Gamble has been named an ACC postgraduate scholar, while Van Fleet was an All-ACC rower this spring for the Tiger program.