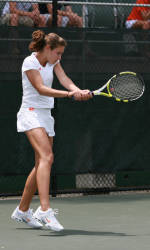 CLEMSON, SC – Clemson women’s tennis players Ani Mijacika and Ina Hadziselimovic on Thursday as the national doubles tournament gets underway. The 2009 events will be held at the George P. Mitchell Tennis Center on the campus of Texas A&M University in College Station. Mijacika earned the number-four seed in the event while Bek received a 9-16 seeding to give the Tigers two players in the national singles tournament for the second straight year.

Mijacika, a junior from Makarska, Croatia, will be making her third appearance in the NCAA Tournament and will play Marta Lesniak of SMU in her opening match. After falling in the first round as a freshman in 2007, she advanced to the round of 16 last year. This also marks the second consecutive season that Mijacika has earned a top-eight seed for the tournament as she was the number-two seeded player in 2008. She owns a 28-8 overall record in 2008-09 with a 16-5 ledger in dual matches. Mijacika has spent six weeks as the nation’s top player in the Campbell/ITA Tennis rankings and has been listed in the top five in every poll this spring.

Freshman Bek received a 9-16 seed for her NCAA Singles Championships debut. The NCAA seeds players one-through-eight individually, but the next eight players in the 64-player field are listed as a group. Bek already has a tournament crown in her collection as the native of Osijek, Croatia won the Wilson/ITA Southeast Regional in October. With her 32 wins this season, compared to nine losses, she became just the fourth different player in Clemson history over the last 13 years to reach the mark. Bek has been ranked among the top 15 singles players all season as the Tigers have been the only team in the nation to boast two players ranked that highly. Her opening-round opponent will be Fresno State’s Anastasia Petukhova, whom Bek defeated in straight sets at the ITA National Indoor Championships in February.

Mijacika will team with rookie Federica van Adrichem in 2007 for an historic run as the duo became the first Clemson team to reach the semifinals of the tournament. Mijacika and former Tiger Carol Salge advanced to the quarterfinals last season before falling in a three-set battle.

Bek and Hadziselimovic then earned a late bid for the doubles tournament as the top alternate team. With their selection, the Tigers will send two teams to the NCAA Doubles Championships, which selects 32 teams, for just the second time in history and the first since 1986. Bek and Hadziselimovic are winners of 10 of their last 13 matches. They have compiled a 15-7 record playing primarily at the second position and will face Georgia’s tandem of Nadja Gilchrist and Chelsey Gullickson, a 5-8 seeded team, on Thursday.