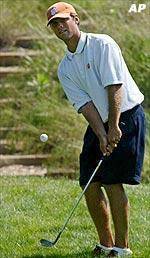 Four Tigers In Pursuit of PGA Tour Card on Monday

Former Clemson golfers Kevin Johnson, John Engler, Danny Ellis and Matt Hendrix are all within four shots of the magic 30th place ranking heading into the final round of PGA Tour Qualifying school on Monday. Johnson, Engler and Hendrix all shot rounds of five-under-par 67s on Sunday in the fifth round.

The 108-hole marathon concludes on Monday with 18 holes. The top 30 players, plus ties will receive their PGA Tour cards for the 2006 season.

Johnson stands in 31st place at 10-under-par heading into the final round.. After a 73-74 start that left him in 117th place, Johnson has had rounds of 68-68-67 to reach the thick of the race. Engler stands in a tie for 35th place with a nine under par figure. Danny Ellis, who was in second place after three rounds, slipped to 73 on Sunday and is tied for 35th with Engler after five rounds at nine-under-par.

Hendrix had a strong 67 on Sunday, the same score he posted in the opening round. He stands at seven-under-par good enough for 48th. Elliot Gealy, a fifth former Tiger in the field, stands in 128th place entering the final day at three-over-par. He shot a 74 on Sunday.