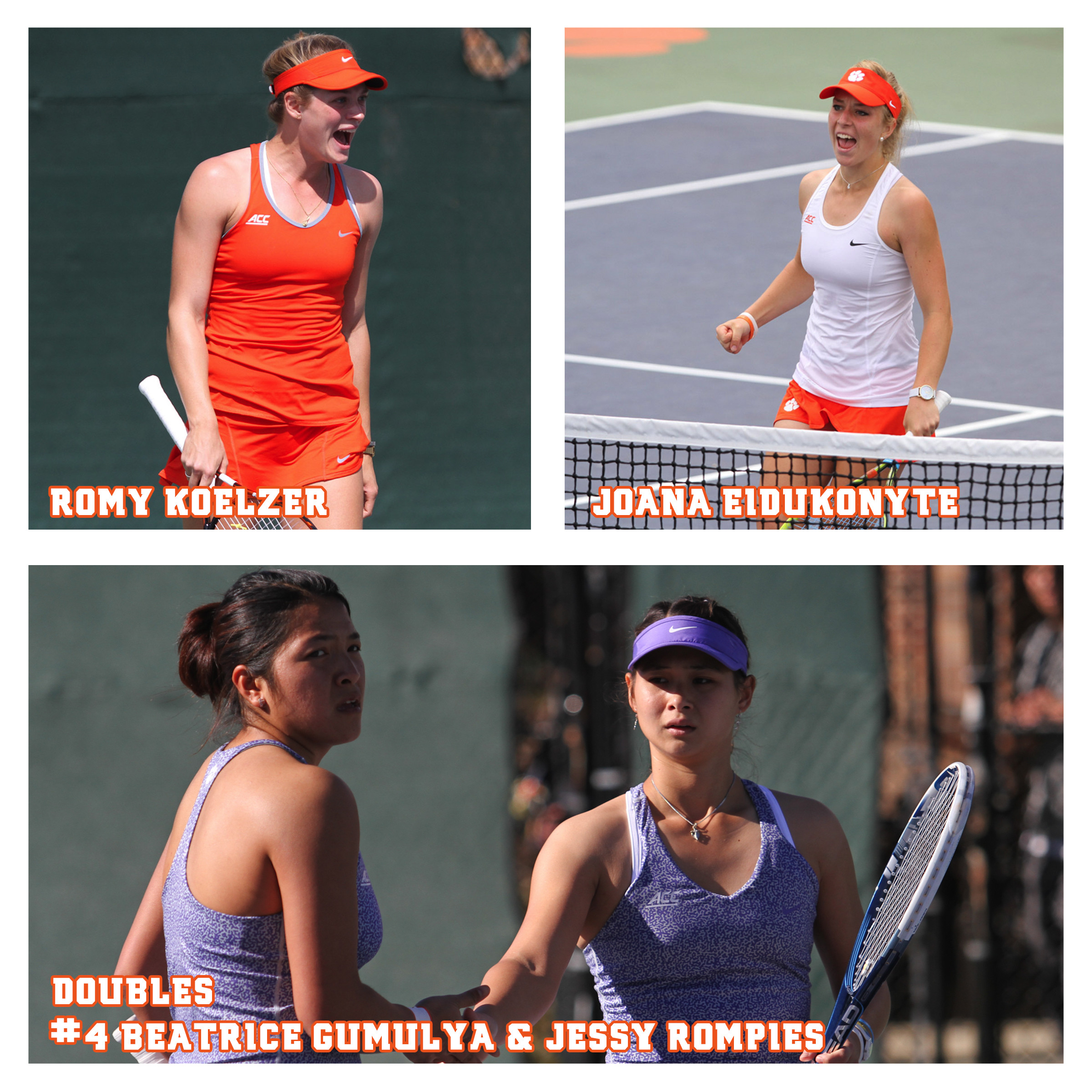 CLEMSON, S.C. – Four members of the Clemson women’s tennis team received bids to the NCAA Individual Championships and will compete at Baylor University in Waco, Texas May 20-25 as announced Wednesday evening. Joana Eidukonyte and Romy Koelzer will each compete in the singles draw, while Beatrice Gumulya and Jessy Rompies will compete in the doubles draw. Gumulya is also the second alternate for the singles championships.

Draws for the event will be released at a later date closer to the tournament.

Eidukonyte, a First-Team All-ACC selection, is making her first appearance at the Individual Championships. Eidukonyte is ranked 13th nationally and holds a 33-6 record in singles play, including 10 wins over ranked opponents. The junior from Vilnius, Lithuania has won nine of her last 10 matches and four consecutive matches, including both of her matches at the ACC Championships in Cary, N.C. last week.

Koelzer, also a First-Team All-ACC member, is making her second consecutive NCAA Singles appearance. Koelzer amassed a record of 20-10 playing primarily in the top spot for the Tigers. The senior from Betzforf, Germany is ranked No. 34 and has recorded seven wins over ranked opponents this season, including a 6-4, 6-1 win over top-ranked Julia Elbaba of Virginia on March 20. Koelzer advanced to the second round of the NCAA Singles tournament in 2014.

Gumulya and Rompies, both natives of Jakarta, Indonesia, are making their second consecutive appearance in the national doubles tournament. They are the automatic qualifier from the ACC and will be the No. 4 seed in the tournament. The duo, ranked fourth nationally, is 26-4 on the season. The pair, who spent over a month as the top ranked doubles team in the country earlier this spring, won the 2014 Riviera/ITA All-American Doubles Championship in October and made it to the quarterfinals of the 2014 USTA/ITA National Indoor Intercollegiate Championships.

Yesterday, the 21st-ranked Tigers received an NCAA bid for the Team Championships. Clemson will head to Tuscaloosa, Alabama for the first and second rounds and will compete against South Alabama in the first round on Friday, May 8 at 1 p.m. C.T.  Alabama and Samford will play at 4 p.m., also on May 8, with the winners playing on Saturday, May 9 at 1 p.m. C.T.