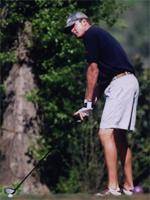 Former Clemson golfers D.J. Trahan, Richard Coughlan, Danny Ellis and Charles Warren will be in the field for the final stage of PGA Tour Qualifying next week. The 108-hole final stage will take place December 3-8 at Orange County National in Winter Garden, FL.

The four players listed above will attempt to join former Clemson All-Americans Jonathan Byrd and Lucas Glover, who already have their PGA Tour card for 2004. Byrd finished 47th on the money list in 2003 to retain his card, while Glover qualified by virtue of his 17th place finish on the Nationwide Tour money list.

Trahan, Coughlan and Ellis all qualified for the final stage with a top 20 performance at a second-stage qualifier. Warren went straight to a final stage by his number-28 finish on the Nationwide Tour in 2003.