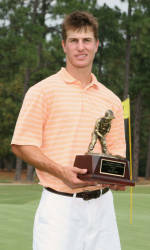 Clemson, SC – Four current Clemson golfers, plus assistant coach Phillip Mollica, who won the tournament last year. The event will be held at the Pinehurst #2 course, which is also the site of this summer’s United State’s Amateur in August. The event will consist of 36 holes of stroke play qualifying, followed by a 64-player bracket for the match play championship.

Mollica is off to a strong start to the summer with a victory at the Monroe Amateur two weeks ago. He won that tournament by six shots and he became the first two-time champion of the Monroe Amateur. Mollica also finished fourth this summer at the Sunnehanna Amateur. The native of Anderson, SC is currently ranked 63rd in the World Amateur rankings according to Golfweek. He is 25th among United States Amateurs. Mollica won six matches to win the North-South last year, including and 8 & 6 victory in 36-hole final.

Also in the field at the North-South Amateur will be Kyle Stanley, David May and David May also helped the Tigers to a fifth place team finish at the NCAAs. He had a fourth place finish at the Monroe Amateur two weeks ago.

Byrd is an assistant coach under Jonathan Byrd has had an accomplished amateur career. He finished in the top 8 of last fall’s United States Mid-Amateur tournament.