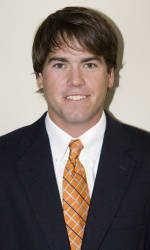 CLEMSON, SC – Four Clemson golfers have been named to the Ping All-Region Golf team. The team is selected each year by the Collegiate Golf Coaches Association. It is the most All-Region selections for the Clemson program on record.

The list of Tigers named to the team is led by graduate Ben Martin. The native of Greenwood, SC leads the team in stroke average 72.31 and he has a team best five top 10 finishes. Martin finished third at the NCAA Regional at Alpharetta, GA on May 22. It is the second time in his career he has made the All-Region team. He was also selected as a freshman in 2007.

Classmate and graduate Luke Hopkins was also named to the team. The native of Greer, SC entered the NCAA national tournament with a 72.78 stroke average, third best on the team, but he is ranked 86th in the nation on the Sagarin computer ranking, second best on the team.

Jacob Burger is a third Tiger on the All-Region team. The sophomore from Orangeburg, SC entered the NCAA Tournament with a 72.66 stroke average, second best on the team. He finished 17th at the NCAA Southeast Regional and had a streak of six consecutive top 20 finishes entering the NCAA national tournament.

The fourth member of the All-Region team is freshman Corbin Mills. The native of Anderson, SC has a 73.00 stroke average this year, fifth best in Clemson history for a freshman.