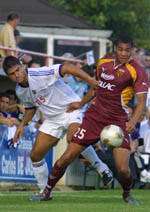 Starting and going the distance in his regular central defence role in this nationally televised match, Gooch scored the equaliser in the 15th minute to take the match to 1-1.

“After a corner kick they cleared the ball out and tried to play an offside trap,” he said, describing his goal. “Me and another guy beat the trap. My team mate dribbled the goalie then passed it to me. I shot it left-footed, far post over a defender’s head who had made it back.”

Click here to read the rest of the article