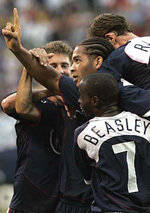 “There were definitely some anxious momemts,” Onyewu said. “Nobody expected to win it in the last minute, but thankfully I was able to get my head to it. I don’t think anybody wanted to play another 30 minutes.”

The Americans remained on track for their third Gold Cup title and first since 2002. The final is Sunday.

Honduras was seeking its first final since it lost to the United States in the inaugural title match on penalty kicks in 1991. The Central Americans led on a 30th-minute goal by Ivan Guerrero, but wilted late under repeated attacks by the United States.

“We didn’t have much time to prepare for this tournament,” Honduran manager Jose de la Paz said. “We did our best to build cohesiveness, but it’s not a lot of time.

“You can’t lose chances to the U.S. They’re persistent, and you can’t play that way because of their persistence.”

Honduras had won only two of 11 previous meetings against the United States, the last a 2001 World Cup qualifying win in Washington. Guerrero’s goal followed 30 minutes of mostly Honduran possession and chances. He ran onto a ball served down the middle by Milton Nunez and beat U.S. goalkeeper Kasey Keller from 19 yards (meters), delighting the overwhelmingly partisan Honduran crowd.

But the United States dominated the second half, tying the match in the 86th when Onyewu fed Landon Donovan in the penalty area. The American midfielder drove across the area and Honduras defender Erick Vallecilo poked it onto the left foot of O’Brien, who volleyed the ball inside the near post.

Onyewu scored the winner heading in a long ball from Donovan, knocking it in off the underside of the crossbar.

Honduras started quickly, putting its first chance on goal 35 seconds after the opening kickoff. Wilmer Valasquez stripped defender Eddie Pope of the ball just outside the U.S. penalty area, but his shot was weak and easily handled by Keller.

U.S. fortunes were hampered in the 15th when Pope was forced to leave because of a sprained left ankle and was replaced by Frankie Hejduk. Onyewu, who started on the right side of the defense in a three-back formation, moved to the center and allowed Hejduk to take over his position.

“I don’t know what happened,” Arena said. “There was a foul on (Chris) Armas and I jumped up, protested the call and used a four-letter word. The referee took direction from the fourth official.”

During the Americans’ second-half domination, substitute Pat Noonan’s header in the 76th was blocked by diving Honduras goalkeeper Junior Morales, who also thwarted Donovan on another short-range header in the 83rd.