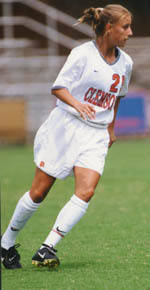 Former Clemson All-American and current member of the Boston Breakers women’s professional soccer team Nancy Augustyniak Goffi was recently interviewed by The Sports Capital. Augustyniak was an All-American for the Tigers in 2000 and was named to the ACC’s 50th Anniversary Women’s Soccer Team.

Click on the link below to read the complete interview with Augustyniak Goffi where she discusses her decision to attend Clemson as well as other defining moments in her career.