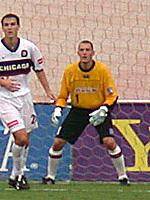 Former Clemson University goalkeeper Matt Jordan has signed a one-year deal with Danish Soccer Club Odense Boldklub. He is expected to battle with Martin Jensen for the starting spot between the pipes.

“Although I have loved playing here in the MLS, I have always wanted to experience living and playing in another country,” Jordan said in a written statement published in the Fort Worth Star-Telegram. “I look forward to the challenge of playing for a club with such a rich history as Odense Boldklub in the Danish Superliga. I look forward to going abroad to test my skills that have been developed at Clemson and in the MLS.”

In his five years in MLS, Jordan started 114 regular season matches and 12 post season affairs. His best campaign came in 1999 when he was a finalist for the MLS Goalkeeper of the Year and was the starting keeper in the MLS All-Star match.

During his tenure at Clemson University, Jordan was named First Team All-America, was a finalist for the 1997 Hermann Trophy, led the ACC in Save Percentage and had a conference best Goals Against Average of (.79). Jordan started every game he played during his career – 80 in total.

“His attitude and willingness to train can make him into a top goalkeeper,” Odense coach Uffe Pedersen said in a written statement. ” With Martin Jensen and Matt Jordan we have made sure that we have two very good goalkeepers in the squad next season. They will both be competing for the goalkeeper’s position, which is what every coach dreams of.”

“Everyone here at Clemson is extremely happy that Matt has been rewarded for all of his hard work and dedication, said Head Clemson Soccer Coach Trevor Adair. “This will be a tremendous opportunity to play in Europe which is something he has always dreamed of during his career. We wish him well and he will represent Clemson to the utmost.”