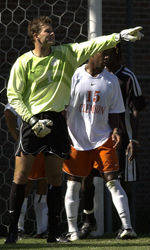 PITTSBURGH, PA – The Pittsburgh Riverhounds are pleased to announce the re-signing of the USL-2 Goalkeeper of the Year Hunter Gilstrap to a two-year contract. Gilstap will rejoin the Riverhounds for the 2011 and 2012 seasons pending USL and USSF approval.

The Riverhounds produced the stingiest defense in the USL-2 during the 2010 campaign, allowing the fewest goals in the league. This defensive prowess on the field was spearheaded by Gilstrap’s play and communication between the pipes. Gilstrap led the league in minutes (1620) and matches played (18), and was second in shutouts (6), saves (74) and goals against average (1.0).

“Hunter’s professionalism and work ethic on and off the field is the exact mold we are looking for in our current and future players,” Riverhounds coach Justin Evans said. “With the completion of the deal, this will ensure that we have secured a big-time goalkeeper for the next couple of years here in Pittsburgh.”

“I’m very excited that I’ve been given the chance to play with the Riverhounds for the next couple of seasons,” Gilstrap said. “I had offers from other teams in USL PRO and the NASL, but I decided to re-sign with the ‘Hounds because I really like the direction that the club is heading. Since I arrived in Pittsburgh last season, I have continued to be impressed with this club’s vision for the future, not just the pro team, but the youth academy too. There’s a real opportunity here, and I want to be on board.”

During the off-season, Gilstrap returned to Pittsburgh in November and was introduced to The Riverhounds Academy. Upon his return, Gilstrap implemented a Goalkeeper Academy curriculum and was the Head Instructor for an introductory six-week course. The response from the young players and parents that were involved in the Goalkeeper Academy was extremely positive.