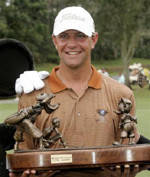 LAKE BUENA VISTA, Fla. (AP) — Lucas Glover was told he would win on the PGA Tour when he least expected it. That was the case Sunday in the Funai Classic at Disney, thanks to a stunning conclusion no one saw coming.

One of 10 players jostling for the lead in the final hour, Glover made a 40-foot birdie putt from the fringe on the 17th and holed a 35-yard bunker shot on the 18th, one of only three birdies on the 495-yard hole, for a 7-under 65 and his first PGA Tour victory.

Glover finished at 23-under 265, and four players behind him still had a chance to at least force a playoff. He headed to the practice range and tried to stay calm as workers noisily tore down the bleachers behind him. Justin Rose hit into a hazard. Geoff Ogilvy found a bunker.

The last chance belonged to Tom Pernice Jr., and Glover stopped hitting balls long enough to look across a strand of trees as Pernice stood over a 15-foot birdie to tie. Pernice’s shoulders slumped after he struck the putt, which didn’t even reach the hole.

“I had my opportunities,” Pernice said. “Lucas shot 65 and birdied the last two holes. He did everything he could to win a golf tournament. My hat’s off to him. He’s a great young player.”

Glover, a 25-year-old from South Carolina with an accent as thick as syrup, became the third Disney winner in the last four years to make this his first PGA Tour victory. He earned $792,000 and moved to 28th on the money list, giving him a good chance at going to East Lake in two weeks for the Tour Championship.

The victory was hardly the way he imagined. This was right out of Fantasyland across the street at the Magic Kingdom, including the bunker shot that he thought would be close enough for par, and turned out perfect.

“You always see someone tapping in to win, or making a 12-footer and going nuts,” Glover said. “Like I said, I was trying to make par. It was a lucky shot, and everyone can say that because it’s true.”

For Pernice, it was the first time in 30 starts that he finished in the top 10, but he was bitterly disappointed.

And he had plenty of company.

Rose was on the verge of winning his first PGA Tour title and had the look of a winner when he hit a 6-iron into 8 feet on the 15th hole for a one-shot lead at 23 under. But he found the rough on the 16th and made bogey, then pulled his tee shot on the 18th into a hazard and dropped another shot for a 68 and a tie for third, two shots behind.

No one felt worse than Ogilvy, the Australian who captured his first tour victory this year in Tucson.

Unable to make a putt on the back nine, glaring at one spectator who clapped when he lipped out a 10-footer on the 13th hole, Ogilvy finally made an 8-footer on the 17th that gave him a share of the lead.

But no sooner had he walked to the 18th tee, he peered up the 18th fairway and saw the tiny image of Glover, spraying sand and raising his fist when the bunker shot fell for birdie.

“I knew I was tied when I made the putt,” Ogilvy said. “And I knew I was one behind before I hit my next tee shot.”

His 6-iron on the 18th looked good, but landed hard to the left and rolled into a bunker about 25 feet away. His wedge caught a small rock in the sand, and the ball squirted away.

He missed the 12-foot par putt, costing him about $189,000 in his bid to make the Tour Championship. Ogilvy closed with a 69 to tie for third and still moved up to 27th on the money list and is virtually assured of at least getting into the Masters for the first time.

Others who finished two shots back were defending champion Ryan Palmer, who shot 62 in the final round last year and looked as though he might do it again. Palmer was tied for the lead at one point, and wound up with a 64.

Rich Beem (70) and Harrison Frazar (68) also were at 21-under 267. Pernice and Tim Clark (72) each made a birdie when they returned Sunday morning to finish the storm-delayed third round and shared the 54-hole lead with Beem. But Disney keeps its fans in suspense, and it was clear from the first couple of holes that this one would not be decided until the end.

As many as seven players had at least a share of the lead. And even in the final hour, PGA Tour rules official Slugger White prepared for extra holes by writing numbers 1 through 5 on a piece of paper for players to draw out of hat to determine who would tee off first in the playoff. By the end of the day, White gave Glover a bear hug on the practice range to congratulate him on a stunning victory.