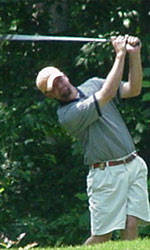 Clemson, SC – Former Clemson All-American Lucas Glover has been named to the United States Walker Cup team. The announcement was made Monday. The competition between the United States and Great Britain Ireland will take place August 11-12 at Ocean Forest Golf club in Sea Island, GA.

Glover is the second member of Clemson’s 2001 golf team to be named to the prestigious team. He joins D.J. Trahan, a rising junior on the 2001-02 Clemson team. This is the first time that Clemson has had two players on the United States Walker Cup team.

Glover was one of three players named to the squad on Monday. The others are Nick Cassini and Erik Compton, two golfers who played at the University of Georgia this past season. Trahan was among seven players named earlier in the summer.

A third player with ties to Clemson will be taking part in the event. Michael Hoey, who played at Clemson as a freshman and sophomore (1998-00), won the British Amateur Championship this year and was chosen for the Great Britain/Ireland team. He will be playing in the British Open this week.

Glover was a two-time first-team All-American at Clemson in 2000 and 2001. He was an honorable mention selection in 1999. The native of Greenville, SC and graduate of Wade Hampton High School was a thiree-time first-team All-ACC selection. He was ranked sixth in the nation in the final MasterCard poll for 2001 and is currently the second ranked United States Amateur according to he Golfweek national rankings.

Glover concluded his four years at Clemson ranked second in career stroke average with a 71.97 figure. He had a 71.18 stroke average for this year when he joined with Trahan and classmate John Engler to lead Clemson to a #2 national finish at the NCAA Tournament in Durham. He had 19 top 10 finishes in his career, including medallist honors at three events. He is also the three-time defending South Carolina Amateur Champion.

The Walker Cup is held every two years. The United States has a 31-5-1 advantage, but Great Britain/Ireland won the 1999 competition, 15-9.