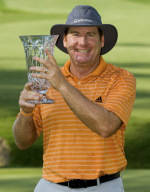 CLEMSON, S.C. – Former Clemson All-American Kevin Johnson won the Rex Hospital Open on the Nationwide Tour at TPC Wakefield Plantation in Raleigh, NC on Sunday. Johnson won the tournament in a one-hole playoff with Jeff Gallagher a former player at Ball State in the mid-1980s. It was a battle of 40-year olds as Johnson is now 42 and Gallagher is 45.

It was the fifth career Nationwide Tour event victory for Johnson, who also won the 1997 Puget Sound Open, the 1999 South Carolina Classic, the 2000 Permian Basin Open and the 2006 Wichita Open.

Johnson and Gallagher both reached the green in regulation on the first playoff hole, the par five 18th. But, Gallagher missed a six-foot putt for birdie and Johnson made his five-footer to claim the championship.

Johnson’s goal is to finish the year in the top 25 as the top 25 on the Nationwide Tour earn a PGA tour card for 2010. Johnson has played on the PGA Tour just one year (2001) since he turned professional in 1990. Johnson has now made eight of 10 cuts this year.

Johnson was a three-time All-American at Clemson between 1985-89. He won the ACC Championship in 1988 and was also a member of the United States Walker Cup team in 1989 after winning the 1987 United States Public Links Championship.