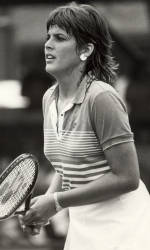 WILLIAMSBURG, VA – Doubles legend Gigi Fernandez, an All-American in her freshman year at Clemson University, will be among this year’s inductees to the ITA Women’s Hall of Fame in an event that will take place on the College of William and Mary campus, on Friday, September 19.

Beatriz “Gigi” Fernandez won 17 Grand Slam doubles titles and two Olympic gold medals during her pro career from 1983 to 1997. Recruited to Clemson from her native Puerto Rico, she reached the national intercollegiate singles finals in her freshman year and then joined the professional circuit. She captured 69 doubles titles overall, and reached as high as No. 17 in the singles rankings.

After retiring from the tour, Fernandez went on to earn her B.A. with honors from the University of South Florida in 2003. She also coached the USF women’s tennis team from 2002-05, taking the unranked team to a Top 30 ranking. Dedicated to developing Puerto Rican tennis, Fernandez worked with the island’s Fed Cup and Olympic teams, and in 1999 was named Puerto Rico’s Female Athlete of the Century. She is currently enrolled in the M.B.A. program at Rollins College.

She was inducted into the Clemson Athletic Hall of Fame in 2005.