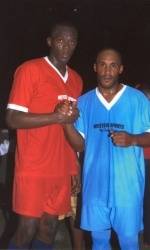 CLEMSON, SC – No matter where a player may go there’s no better feeling than coming home.

For former Clemson soccer star Wolde Harris, it’s one of the greatest feelings in the world.

“What I remember about Clemson first and foremost is everyone was kind and everyone accepted me without conditions,² said Harris. “At the time the guys in the program were very close and we did everything together. The biggest thing about being a good team, and this is true no matter where you go, is for the team to do a lot together. They accepted me and made me feel very comfortable at the start. It felt like a family. We used to eat dinner together and hang out with each other. Coach Ibrahim did a great job of instilling teamwork and camaraderie. My teammates made me feel very comfortable and express myself, and the love of soccer. Each player sacrificed their personal goals and worked hard for the good of the team. It was a wonderful experience at Clemson and we had a lot of fun.”

Harris, a Kingston, Jamaica native, made the most of his Clemson experience as he finished his career as one of the best players ever at Tigertown.

Harris played soccer for Clemson in 1993-1995 after spending his freshman season at the University of Connecticut. In only three years at Clemson, he became the Tigers’ all-time career goal scorer with 76, second on the Atlantic Coast Conference’s career list.

In 1995 he was a finalist for the 1995 Hermann Award and was named All-American that season. He was a three-time All-Atlantic Coast Conference selection that included first team honors in 1995.

Harris led the nation in goal scoring with 26 goals in 1994. He was second in the nation in goal scoring in 1993 with 29 behind Clemson teammate Jimmy Glenn who had 32. He was tied for fifth for most goals scored nationally in 1995 with 21. Harris is also second on the school’s career list for most points with 170. He is the Tigers’ all-time leader for most game-winning goals with 21. His eight career hat tricks are tied for first on the Clemson career list. He is only the second player in Clemson and ACC history to score 20 or more goals for three consecutive seasons. He was also named a member of the ACC’s 50th Anniversary team.

Harris also liked the environment at Clemson and the support shown to the soccer program.

“The facilities and the support at Clemson were unbelievable! As a player from Jamaica, this helped me relax and be comfortable. There’s no place like Historic Riggs Field. It would be packed and we had some awesome fans supporting us. There would be fans and supporters from others sports coming to watch us play. It was definitely a family feeling. And as they say, there is nothing like the Clemson family.”

Harris played professionally in the MLS. He joined MLS for the first time in 1997, after spending 1996 with the Colorado Foxes, leading the A-League in goals with 17. Harris played three seasons with the Colorado Rapids, scoring 13 goals in 1998. In 2000, he was traded to the New England Revolution for draft picks. Wolde’s best season with the Revs was his first, when he scored 15 goals. Harris would spend three and a half seasons in New England, before a trade to the Kansas City Wizards midway through 2003. He spent 2004 with Swedish club Bodens BK before coming back to MLS and Colorado in 2005. In eight years in MLS league play, Harris scored 51 goals and added 31 assists. He signed for Salvadoran outfit Club Deportivo FAS in August 2006.

After playing professionally, Harris wants to give back. This summer he has been working at Clemson Head Coach Mike Noonan’s Soccer Camp. He is working on the process of coming back to Clemson to finish his degree in the near future. Recently, Harris has been involved in youth football in the United States and Jamaica. In December 2009, he launched a company called Jamaica Grassroots Football with his father and brothers, teaching and coaching youth about the game of soccer.

“I feel the Clemson soccer program has a bright future with Coach Noonan. He has a lot of great ideas in being successful in the way college soccer is now. He knows of the great tradition that Clemson had and what is expected of him. I know that it’s on the top of his list to get the Tigers back to these realms of success.

“Right now I have been working at Coach Noonan’s camp this summer, and I have talked to the academic people about finishing my degree. I don’t start something and not finish it. I remember when I got drafted in the pros my Dad said you’re going back and finishing your degree. This is the most opportune time to do this. Clemson is my home away from home, and it is where I’ve met a lot of good people. It’s always great to come home to Clemson and be part of the Clemson family.”