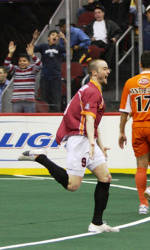 Newark, N.J. – The Major Indoor Soccer League announced the 2007-08 All-Rookie Team, and New Jersey Ironmen forward Frederico Moojen got the nod as one of the six league representatives. The voting panel for the awards consisted of head coaches, managerial staff and members of covering media from each MISL club.

Moojen was second on the Ironmen with 22 goals in the regular season, and he added seven assists for 52 points in 27 games. He led all MISL rookies in both points and goals, and he banked two hat tricks this season. He also registered a two-point score and an assist in the New Jersey quarterfinal series against the Baltimore Blast this past weekend.

“I have been surprised how well I was able to adjust to the indoor game,” Moojen stated after receiving notification of his All-Rookie Team selection. “While I always look to improve my game, I have been happy with the outcome so far.”

Someone else who has been happy with his production has been Ironmen Head Coach Omid Namazi, who took Moojen in the first non-territorial round of the 2007 MISL College Draft.

“I knew that with his futsal background along with the fact that he played college soccer in the United States, he had a great chance for success in this league,” Namazi said. “From the beginning, I expected a lot from Freddy, but he surpassed those expectations.”

Moojen commented on the impact that Namazi has had on him.

“Coach Omid gave me the opportunity to come here and prove myself, and I am very grateful for that,” he stated. “When your coach has that much confidence in you, it makes it easier to succeed.”

While switching to the indoor format has taken some adjusting, Moojen has maintained a positive approach to how he conducts himself.

“Whether it be training or playing a game, I try to learn something different everyday,” Moojen remarked about his approach to perfecting his craft. “One of the major adjustments I had to make for playing indoor soccer was in terms of marking on defense. If you don’t mark in this league, you can cost your team a goal.”

Following a pair of seasons at Lincoln Memorial University in Harrogate, Tennessee, Moojen was twice named the Gulf South Conference Player of the Year. In his two years suiting up for the Railsplitters, he tallied 48 goals and 109 points, and he was named the 2005 LMU Male Athlete of the Year. His 23 goals in 2005 ranked first in the nation, and his 51 points were second in the country. His solid output led the Railsplitters to their first-ever regular season conference championship that year. The following year, the Brazilian striker transferred to Clemson University and tallied 24 points including 11 goals.

While attending college, Moojen also played two seasons for the Cocoa (Florida) Expos of the USL Premier Development League (PDL). In 2004 he registered ten goals and three assists during his first season with the club, and he led the PDL in goals (18) and points (43) during his second season. In 2006 he was named the PDL Most Valuable Player after recording 18 goals for the Augusta Fireball, winning the league Goal Scoring Championship. In three seasons in the PDL, he tallied 46 goals.

Moojen spent last year with the Montreal Impact of the USL First Division after being selected in the second round by the Impact in the USL College Draft. In his first season playing for the Canadian club, he started eight of 14 contests and netted a pair of goals. He is now preparing for a second season in the USL but has yet to determine where he will be playing.