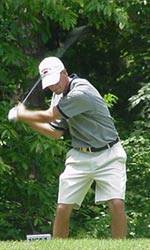 Clemson, SC – Former Clemson golfer Jani Saari has advanced to the second round of qualifying school for the European PGA Tour. Saari, a 2001 graduate, was a member of the Clemson golf team from 1997-2001 and helped the Tigers to a second place finish in the 2001 NCAA Championships. While at Clemson, Saari played in 18 tournaments and had his score count in all but 2 of his 12 NCAA Championship rounds. He is regarded as the best number five player in Clemson history.

The Challenge Tour Qualifying Tournament, held Sept.18-21, is the first step in the process of becoming a member of the European PGA Tour. The top 25 finishers advanced to the second round of 103 enteries.

Saari,representing Finland, finished the tournament held at the Five Lakes Golf Course in Essex, England with a score of 279. He shots rounds of 73, 72, 66, and a final round of 68. He tied Roby Paolillo of Italy for third place. Adam Crawford of Australia shot a 276 to secure a first place victory.

Saari will go on to compete in Stage Two of the Challange Tour in Spain fom Nov.6-9.