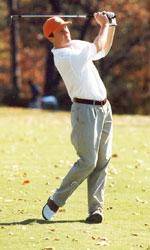 Clemson, SC – Former Clemson golfer Michael Hoey will compete in the 2002 Masters, an event that begins on Thursday. It will mark the second straight year a golfer with Clemson ties will compete in the event. Last year, current Clemson junior D.J. Trahan made the field by virtue of his 2000 United States Public Links championship.

Hoey qualified for the 2002 Masters by winning the 2001 British Amateur at Prestwick Golf Club in Scotland. Hoey has retained his amateur status and is currently ranked fourth in the World Amateur rankings according to Golfweek. One of the players ahead of Hoey and ranked second in the world is Trahan, who is the leader of this year’s second-ranked (Golfweek/Sagarin) Clemson team.

Hoey played at Clemson for the 1998-99 season and for the first semester of the 1999-00 academic year. He decided to return to his native Ireland in the winter of 2000. During his Clemson career he was a starter on the 1998-99 team that finished eighth in the nation that year.

Hoey began his Clemson career with a pair of top 10 finishes, as he he was sixth at the Jerry Pate Intercollegiate in October of 1998 with a 206 score, six-under-par, then was ninth at the Golf World at Hilton Head Island with a 215 total, one under par. Hoey finished 12th at the ACC Tournament, 37th at the NCAA Regional and 74th at the NCAA Championships in 1999.

The native of Belfast, Northern Ireland, played in two events in the fall of 1999 before deciding to leave school. At The Ridges Intercollegiate at Johnson City, TN in 1999 he recorded the first hole-in-one in Clemson golf history. He finished 23rd at that tournament.

Hoey is the seventh golfer with Clemson ties to play in the Masters. The first was Parker Moore, who played for the Tigers from 1972-76. He was the runnerup in the 1976 US Amateur and played in the 1977 Masters. Chris Patton won the 1989 US Amateur and thus played in the 1990 Masters. Patton became the first Tiger to make the cut at the Masters and his 296 score was good enough for 39th and low amateur status.

Dillard Pruitt played in the 1992 and 1993 Masters, the only former Tiger to play in more than one. His 282 finish in 1992 was good enough for 13th, the highest finish ever by a former Tiger at a major. He had a second round 68, also the best by a player with Clemson ties at the event. Danny Ellis, Clarence Rose and Trahan are the only other golfers with Clemson ties to play in the Masters. Patton and Trahan are the only ones to play at Augusta while they were still a member of the Clemson golf team.