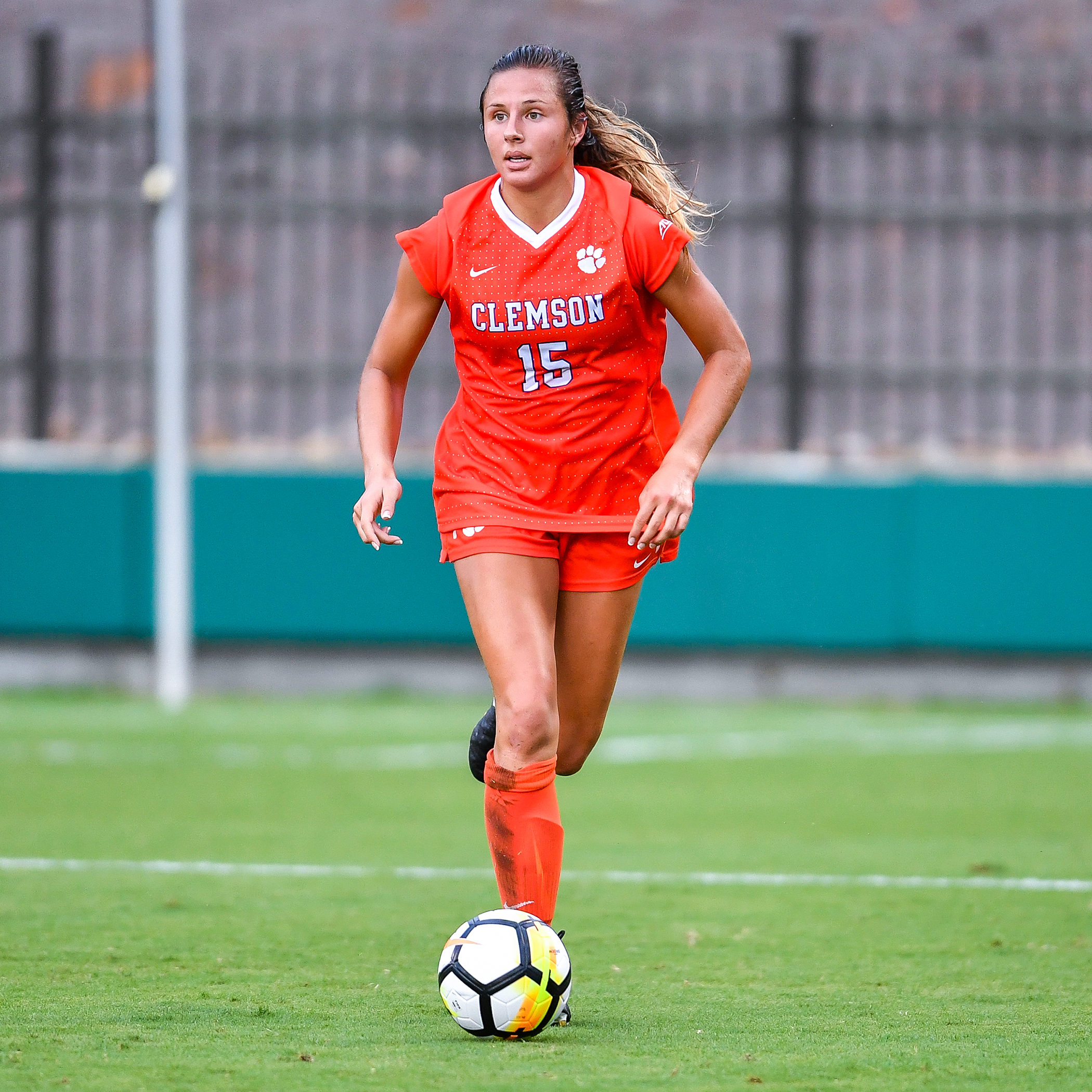 Women’s soccer standout Sam Staab has succeeded since day one at Clemson.

Like many athletes, Sam Staab tried multiple sports growing up, but she ultimately found her calling on the soccer pitch.

“I first started playing soccer with all my friends in the community when I was about five. I tried out almost every sport growing up, but I ended up loving soccer the most and stuck with it.”

This love of soccer has led Staab down a rather successful path. She is now a senior midfielder and defender for the women’s soccer team, and she has been a major contributor in each of her first three years on the team.

Her journey to a successful Tiger career began with her unique visit. The San Diego, Calif., native always knew she wanted a different experience in college, and she credited her visit for helping her make her decision.

“I always told my parents when I was going through the recruiting process that I wanted to experience something different for college, so I never really looked anywhere close to home.

“I came on a visit and I was so sick, it was pouring rain and I should have had a terrible time, but I loved every minute of being on campus…the school, the atmosphere, the team and the people. So I thought if I had such a great time on a miserable day, then coming to school here was bound to be great.”

Staab knew what she was getting into coming across the country for a different experience in college, but she cited the biggest difference in her transition to Clemson as the pace of lifestyle. She also enjoyed Southern hospitality, which may explain why her favorite aspect of being a Tiger is the Clemson Family.

“I love the whole Clemson Family aspect of being a Tiger. It was a big reason why I fell in love with the school and has already made a huge impact on my life, just through meeting and getting to know so many people because of our mutual connection in Clemson. It hasn’t been a bad four years to be a Clemson Tiger here either, and being able to say I go to Clemson with so many people now knowing all about our great school has been really amazing.”

Staab made an immediate impact her freshman season, playing and starting 20 games as a center back, and leading the team in assists (7). She made the most of her time on the pitch, earning All-ACC Freshman honors as well as being named the team’s newcomer-of-the-year and receiving a CLEMMY award as rookie-of-the-year.

The immediate contributions meant a lot to Staab, but she also credited the support of her coaches and teammates for helping her succeed.

“Coming in my freshman year and being able to make an impact meant the world to me. My coaches and teammates took a chance on me as a young player, and a lot of my success is due to their encouragement and helping me really develop as a player in that first year.”

Staab has continued to contribute throughout her Clemson career, starting all 23 matches as a sophomore in 2016, and leading the team with an impressive 11 assists. As a junior in 2017, she played all 1,802 minutes of the season and tallied four assists, all on game-winning goals. Her success can be traced back to the support she received from her teammates that boosted her confidence.

“Having that support was definitely a confidence booster, and one that I’m really grateful for. A big downfall for a lot of people in athletics is between your ears…your mindset, confidence and mentality day in and day out. Seeing that the coaches and team trusted me from the get-go gave me confidence and changed my mindset to one of positivity and growth that has continued throughout my career.”

Staab has utilized this mindset to earn three career all-conference selections, the all-rookie team in 2015 and Second-Team All-ACC honors in 2016 and 2017. These honors are meaningful to Staab, but she is quick to deflect her priorities towards team success.

“These honors mean a lot to me because they are voted on by the coaches in the conference. However, they aren’t everything, and I always will remember championships and games with my team more than individual awards each year.”

The pitch isn’t the only place Staab has found success. She has also excelled in the classroom, earning multiple academic honors to go alongside her athletic accomplishments. She has earned three career All-ACC Academic nods, three ACC Academic Honor Roll selections and numerous Clemson honor roll awards. For Staab, it’s just as important to succeed in the classroom as it is to succeed on the pitch.

“I’m one of the few people I know who actually really enjoys school. I like doing homework and learning new techniques and things about my degree and other subjects that I’ve taken while at Clemson. My parents and our coaching staff have always emphasized the importance of academics, and with the help of the staff in the Nieri Family Student-Athlete Enrichment Center, you are really set up to succeed.”

Not only has Staab had success at the Division I level, she has also had the opportunity to succeed at the national level. She has participated in multiple camps with U.S. Soccer and with the U-23 national team, whose primary role is to develop players on the full women’s national team.

“Being able to have those opportunities has been amazing. Wearing the crest for the first time is a feeling I will never forget, and I’ve been so thankful to continue to be able to train and play for the United States.”

The experiences Staab has had with U.S. Soccer have been fun, and they’ve also helped her grow as a player.

“The environment with the U-23s is different from here at Clemson and has been a complete whirlwind of new information. I play two positions on the team that are slightly different from my position at Clemson, so being able to bring that knowledge to my game has been great. I have really learned a lot from the experience and can’t wait to continue!”

Staab appreciates the opportunity to learn and grow, not just at the national level, but also at the college level, and she believes she has grown both as a person and as a player since coming to Clemson.

“The experiences and opportunities I’ve had at Clemson have been amazing. Our coaching staff has bought into getting to know me, not only on the field, but also off. Those relationships with the staff have enabled me to excel in this environment.”

Staab is excited for her senior season, although she can’t believe that it’s already here. Her love of the game is still burning strong, and she hopes to enter the NWSL draft after finishing college and put her skills to work as a professional athlete.