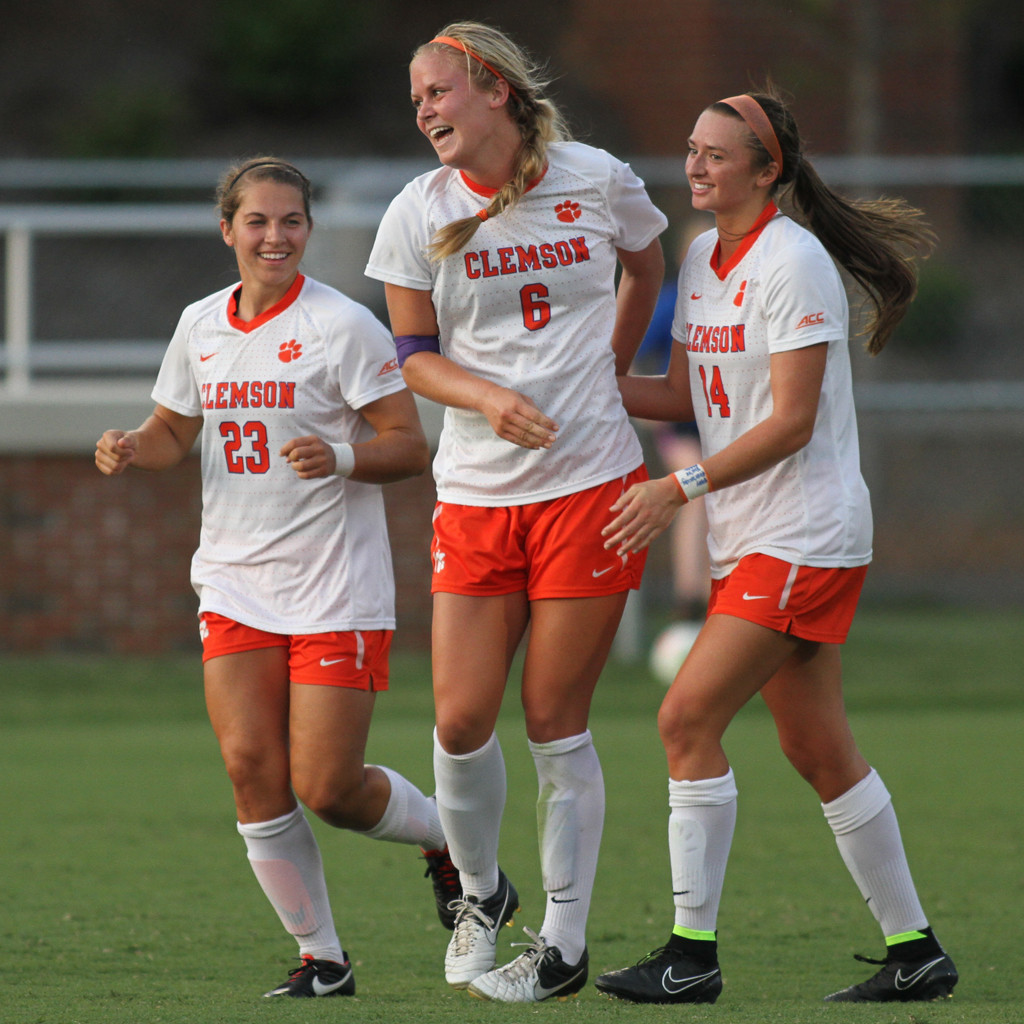 This article appeared in the official Clemson vs. SC State Football Game Program on Saturday, Sept. 6.

Senior Savannah Coiner bought into the idea of the Clemson Family before she even decided to be a part of it. The defender from Rocklin, Calif. took a visit to Clemson the summer before her junior year of high school and never looked back.

“I came to the campus and loved everything about it,” said Coiner. “Throughout the entire recruiting process, I always had Clemson on my mind. It felt right and felt like I belonged at Clemson. It’s such a family atmosphere. All the athletes are one big family and I loved that.

“Clemson was my first visit. From then on, I visited others but always found myself saying, ‘but Clemson this’ or ‘but Clemson that.’ My parents kept telling me to pursue Clemson since it felt so right.”

Coiner followed her heart and chose to play for the Tigers. Shortly after she committed, the team underwent a head coaching change. Hershey Strosberg, who had recruited Coiner, departed and though there was a lot of uncertainty surrounding the program, Coiner’s commitment never wavered.

“I talked to my parents and reminded myself I chose Clemson because of the place and the school,” stated Coiner. “I knew wherever I was going, I didn’t want it to be just because of soccer. I wanted to love the place I was going to be for four years, so I stuck with it and got a call from Coach Radwanski when he was hired. It’s all ended up really well.”

Thanks to the support from her Clemson Family, the West Coast transplant adjusted quickly.

“It was huge that I came for summer school before my freshman year because we (all Clemson athletes) were there together instead of being thrown in with everyone else at once in August,” admitted Coiner. Vickery Hall did a great job getting us involved and helping us along that summer. It was great having the soccer girls around because we had some who were from far away and going through the same thing.”

Coiner bonded with teammates right away and cited the girls as what she will miss most when her time at Clemson is finished.

“Our bond is so strong because we have stuck through the process together and have truly bonded,” she noted. “We are all so close. I think team chemistry is one of our biggest assets. We genuinely enjoy being around each other. If I have a bad day, going to practice just automatically cheers me up.”

Though the team has faced some adversity and changes over Coiner’s career, she believes this team is the one to push the program over the hump. The Tigers have not been to the NCAA Tournament since 2007 after going every year for the first 14 seasons of the program.

“We have faced so much adversity as a team and because of that, now there aren’t many things we think we can’t do,” said Coiner. “This year it’s all about belief, believing in one another and believing in what we are doing.”

When asked about her personal goals for the season, she immediately turned the attention to the team and the way she wants to go out when her career is over.

“I want this season to be the best of my career,” she proclaimed. “Being named an All-ACC player would be awesome, but more importantly I want to get this team to the NCAA Tournament. It would be a huge step for the program since we haven’t been there in so long.”

Coiner will graduate next May with a degree in financial management but hopes to continue playing soccer.

“It’s so weird for me to think about soccer not being in my life since it’s been one of the biggest parts of my life for the past 18 years, so I cant imagine giving it up,” added Coiner. “Everyone always says, ‘you have all the time in the world to get a real full-time job, but you can only play soccer so long’.”

I think it is safe to say wherever Coiner ends up, her leadership, determination and positive attitude will guarantee her success.