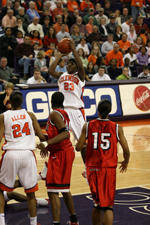 Florida State shot 57.7 percent from the field in the second half and defeated Clemson 68-57 for its second ACC victory this season. The Seminoles are now 15-2 on the season overall, while Clemson dropped to 7-7 (1-1 in the ACC) with the loss.

The Lady Tigers were unable to slow down Roneeka Hodges, the league’s fourth-leading scorer coming into the game. The 5-11 Hodges shot 11-18 from the field and finished with 24 points and nine rebounds. Holly Johnson added 15 points and six assists for Florida State.

Clemson was led by D’Lesha Lloyd with 13 points on 6-12 shooting. It marked the fourth time in the last six games the 6-0 freshman led the Lady Tigers in scoring. Reggie Maddox had eight points and eight rebounds, while Julie Talley contributed eight points, four assists, and five steals.

The Lady Tigers shot 46.2 percent in the second half, but it was not enough to match Florida State’s offensive output. Florida State also held a +8 advantage in rebounding, only the fourth time this season Clemson has been outrebounded.

The Seminoles led as much as 26-13 in the opening half. Trailing 28-15 with just over four minutes to play, Clemson defended the Seminoles well and scored the final eight points of the half to pull within five at the break, 28-23.

In the second half, the Lady Tigers actually grabbed a 49-48 lead with about eight minutes to play in the game. From that point on, the Seminoles outscored Clemson 20-9 down the stretch. Hodges hit three key baskets to help build the Seminole lead in the final minutes. Hodges had 14 points on 7-10 shooting in the second half.

Clemson returns to action on Sunday, January 16. The Lady Tigers travel to Charlottesville, VA to take on the Virginia Cavaliers in a game that will be televised live by Fox Sports Net South at 1:00 PM from University Hall.