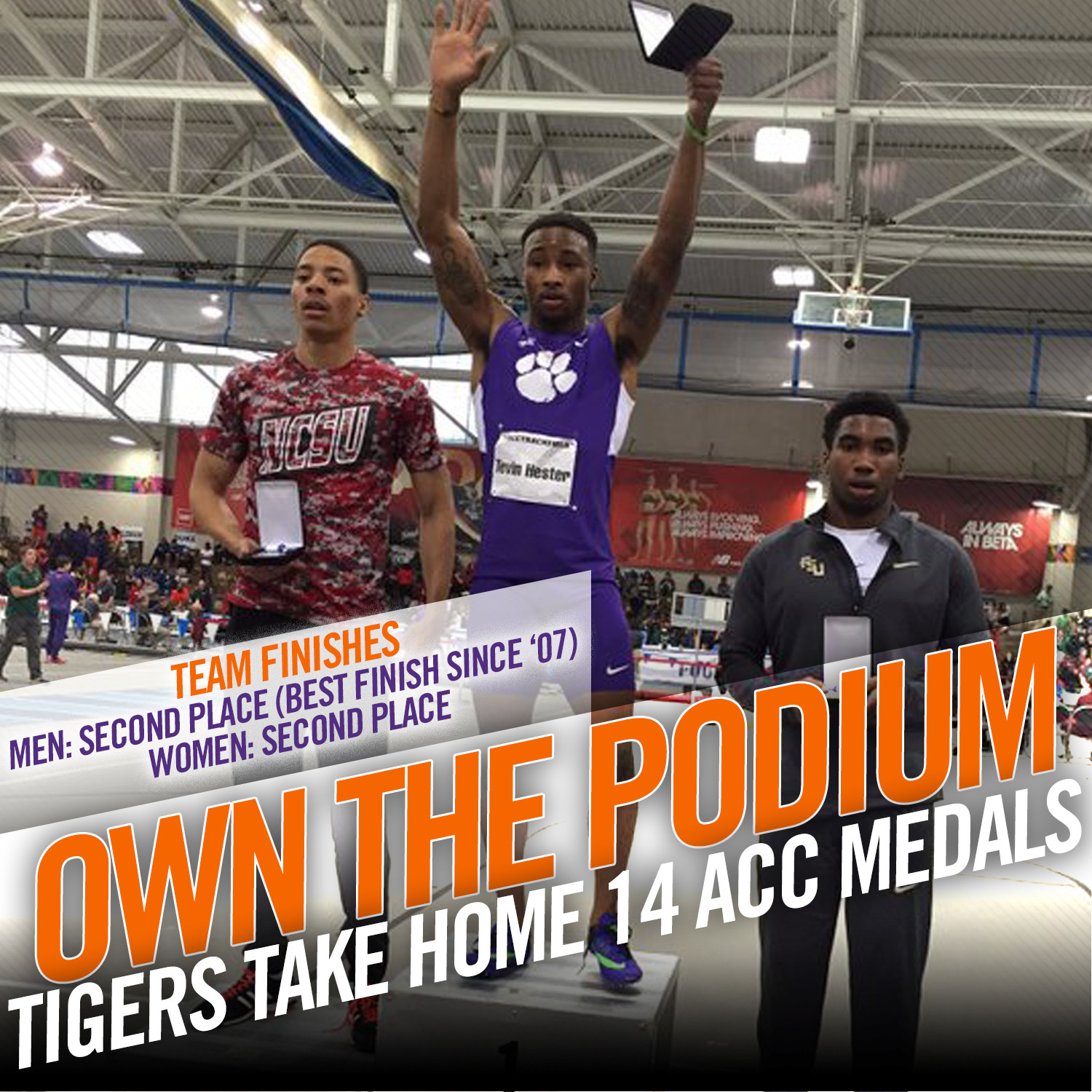 BOSTON, Mass. – On the final day of the ACC Indoor Championships, Clemson benefited from 25 scoring efforts in order for both programs to finish in second place. Of the 25 scorers, 14 were worthy of the podium and five were gold medals.

Miami claimed the ACC title in the final event, winning the women’s 4×400 meter relay to deny Clemson its third-straight ACC title overall and edge the Tigers 85-83 in the team standings.

Syracuse led the field on the men’s side with 88 points but key performances in the triple jump and the 4×400 meter relay allowed the Tigers to pull away from Virginia to claim their best finish since 2007.

Cheeks was part of the golden 4×400 meter relay team and medaled in the 400 meter dash as well. He, along with Cordell Lamb, John Lewis and Jeffrey Green all combined for a time of 3:12.07 to claim Clemson’s fourth relay title in the last six years.

Prior to their performance in the relay, Green, Cheeks and Lamb swept the podium in the 400 meter dash. Green won the event with a time of 46.93, his first individual ACC title. Cheeks earned silver  at 47.41 and Lamb took third with a time of 48.14. Lewis also scored on his own, finishing the 800 meter run in 1:49.83 to take eighth overall in his first collegiate championship meet.

In the field, Shai Carpenter and Ishmael Kamara both scored for the Tigers. Carpenter finished with a jump distancing 52-0.75 to earn the silver medal. Kamara took sixth with a leap of 49-9.25.

For the women, it was the sprinters that shined the brightest with Myasia Jacobs leading the way with her gold medal in the 60 meter dash. The senior busted off a 7.24 in the finals, tying her for the fifth fastest time in the country and advancing her up to third in Clemson history. Sabria Hadley also scored in the event, taking fourth with a time of 7.46.

Hadley struck again in the 200 meter dash, placing second with a time of 23.52. Deja Parrish joined Hadley on the podium with her third place effort of 23.56 and Taylor Williams placed eighth when she crossed the finish line at 24.21. Parrish also medaled in the 400 meter dash, crossing the finish line at the 53.68 mark to earn bronze. Both of her times were personal bests and advance her in the Clemson record book. Her 200 meter time places her eighth all-time while her 400 meter time is the sixth fastest time in program history.

After her two career-best performances, Parrish wasn’t done as she anchored the women’s 4×400 meter relay to a third place finish to end the day. Olivia James, Malayshia George and Tanisha Coppin joined her to combine for a time of 3:37.34.

Coppin ran the relay after scoring in the 800 meter run, earning seventh place at the 2:10.04 mark. Ersula Farrow finished in eighth place at 2:20.06 after she had ran personal bests in the distance medley relay and the 800 meter preliminaries the two day before.

Grace Barnett turned in a pair of gutsy performances despite a devastating blow to the Tigers in the mile. After tripping up Kaley Ciluffo earlier in the race, Virginia Tech clipped Barnett with one lap to go in a battle for the lead. Officials disqualified the Hokie harrier, resulting in a fifth place finish for Barnett and an eighth place finish for Ciluffo.

Barnett came back to exhaust the energy she had left in the 3,000 meter run after she had already anchored the distance medley relay and ran the prelims and finals in the mile. The redshirt sophomore grabbed fifth place, crossing the finish line at 9:23.24.

In the field, Clemson placed three Tigers and two of which landed on the podium. Iana Amesterdam was the runner up with a jump distancing 41-7.75 and Anasterasia Terrell earned bronze with a leap of 41-7. Mimi Land took sixth with her jump of 40-11.

Now, the Tigers await the ultimate test as the NCAA Indoor Track & Field Championships are slated for March 11 and 12 in Birmingham, Alabama.