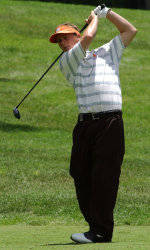 Clemson, SC – Five former Clemson golfers, and current Head Football Coach Dabo Swinney, will compete in the BMW Charity Pro Am on the Nationwide Tour this weekend. The event will be played over three courses in the upstate of South Carolina and North Carolina between Thursday, May 14 and Sunday, May 17.

Swinney will be in the field as a celebrity competitor and will play at least three days at three different courses. Swinney is paired with former Clemson All-American Matt Hendrix in the pro-am portion of the competition. Swinney and Hendrix will start at the first hole at 10:25 AM at Carolina Country Club. It will be Swinney’s first appearance in a pro am at a PGA Tour event. If the Swinney-Hendrix team is in the top 14 after three rounds, it will play at Thornblade in the final round on Sunday.

“I just hope I don’t hurt someone in the gallery,” said Swinney, who is an 18-handicapper. “This might be the first time I have ever played golf three consecutive days, so I am interested to see how I do. It will be great to play with a former Clemson All-American in Matt Hendrix. I am looking forward to it.”

Swinney and Hendrix will play at Carolina Country Club in Spartanburg on Thursday, Bright’s Creek in Mill Spring, NC on Friday and Thornblade Country Club in Greenville, SC on Saturday.

Also in the field are former Tigers Kevin Johnson, Stephen Poole, Brian Duncan and Brent Delahoussaye. Johnson was an All-American at Clemson from 1986-89 and was a member of the 1989 United States Walker Cup team. He was the ACC individual champion in 1988 as a junior.

Poole and Duncan were All-ACC teammates in 2006 when they helped Clemson to a number-seven national finish. Delahoussaye was a teammate of Hendrix in 2004 and was an All-ACC performer in 2005 as a senior.