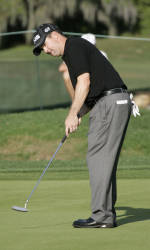 CLEMSON, SC – Five former Clemson golfers will take part in the Quail Hollow Championship at Quail Hollow Country Club in Charlotte, NC this weekend. The tournament begins Thursday and runs through Sunday at the par 72 course.

The group of Tigers in the field includes D.J. Trahan, an All-American and national player of the Year, who led Clemson to the 2003 National Championship, Lucas Glover the 2009 US Open Champion who was an All-American at Clemson between 1998-2001, Charles Warren, the only Clemson golfer to win the NCAA Championship (1997), Kevin Johnson, Clemson’s first three-time All-American, and Jonathan Byrd, the first Clemson golfer to earn All-ACC honors four consecutive years.

Trahan is ranked 34th on the PGA Tour money list so far this year thanks to three top 10 finishes. He finished seventh at the Bob Hope Classic and seventh at the Arnold Palmer Invitational for his top finishes so far this year. Trahan has won $802,639 and ranks third on the PGA Tour this year in greens in regulation (72.4 percent), second in birdies/round (4.24) and sixth in scoring average (69.92). He has made eight consecutive cuts.

Glover has made seven cuts in 10 events so far this year and has won $443,591. He is ninth in average driving distance (294.8) and is sixth on tour in eagles with six. Glover is the highest ranked former Clemson golfer in the World Rankings with a #29 rating.

The Quail Hollow Championship is one of the top events on the PGA Tour. Seven of the top 10 money winners will be in the field and there are 18 former Major champions, including Tiger Woods and Phil Mickelson.