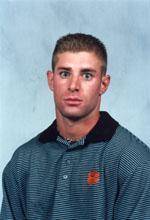 Clemson golfers Jack Ferguson and Martin Catalioto have qualified for the stroke play portion of the U.S. Amateur Championship. The event will be held August 16-22 at Winged Foot Golf Club in Mamaroneck, NY.

Catalioto finished second to Matt Davidson of West Windsor, NJ in a qualifying sectional held at Royce Brook Golf Club in Somerville, NJ. It marks the second consecutive year the rising junior will have made the stroke play portion of the field. Catalioto also qualified for the U.S. Amateur in 2000 and 2001, meaning he has participated in at least the stroke play portion of the event four of the last five years. He also competed in the U.S. Public Links Championship for the second consecutive year, an event that was held July 12-17 at Rush Creek Golf Club in Minnesota.

Ferguson, a rising senior and two-time All-American, won his sectional at Brier Creek Golf Club in Raleigh, NC with a two-day total 133. His total was two strokes better than second-place finisher Will Shambley of Cary, NC. This will be the first time Ferguson has qualified for the U.S. Amateur since entering Clemson. He does have considerable experience in amateur events, including this past June when he won the Sunnehanna Amateur in Johnstown, PA. Ferguson will also be competing for the U.S. Palmer Cup team this weekend under the guidance of Clemson head coach Larry Penley. That event will take place at Ballybunion in Ireland.

Clemson has had a strong history with regards to the U.S. Amateur. Chris Patton won the event in 1989, while Parker Moore (1973) and Danny Ellis (1993) were both runner-up in their respective years.