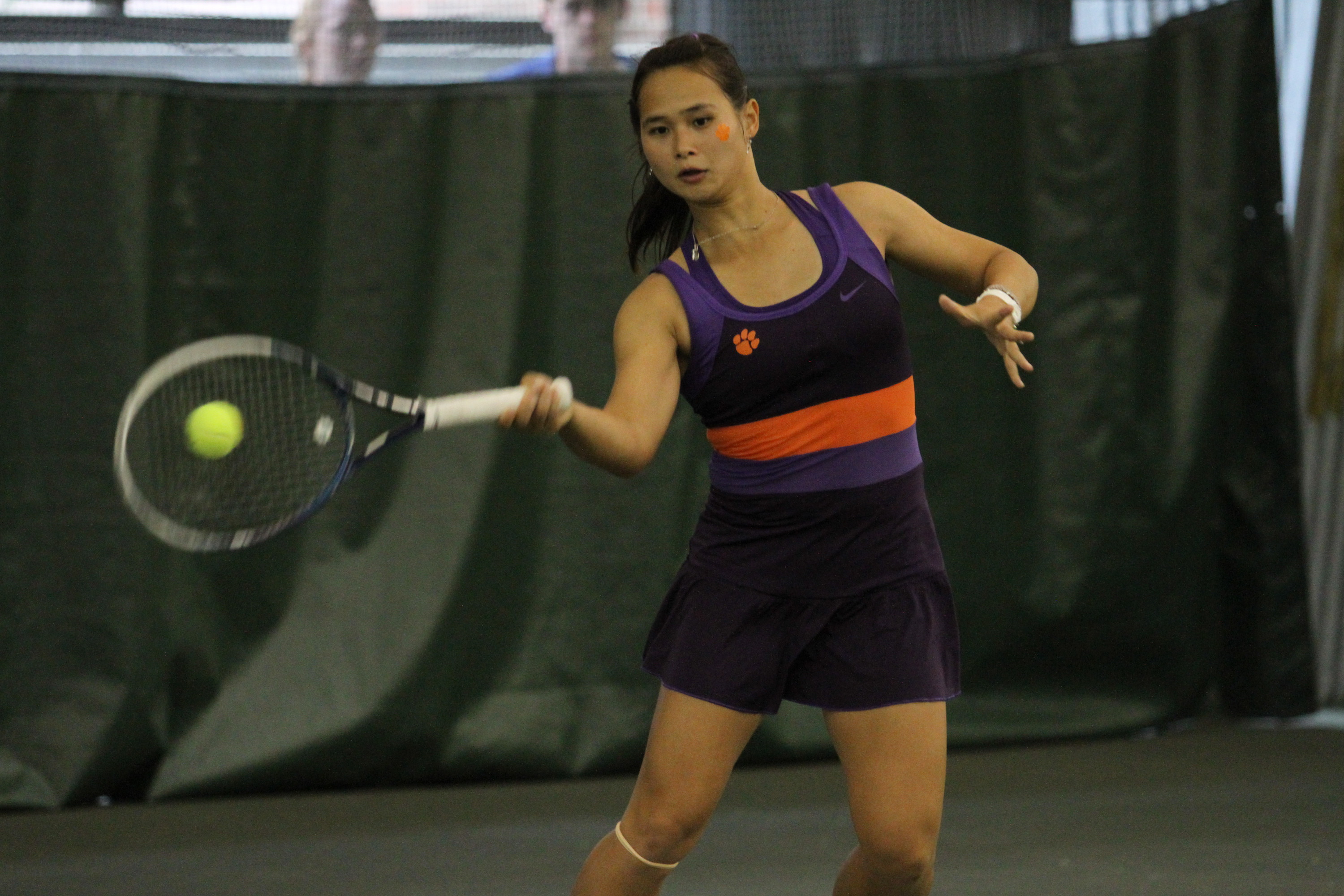 CLEMSON — Beatrice Gumulya built a reputation as the comeback kid for Clemson last season, and lately her flair for the dramatic seems to be rubbing off. Two days after rallying for the first-ever win over a No. 1 team in program history, the Tigers came back in even more improbable fashion, as Gumulya’s victory in a third-set tiebreaker helped them come back from a 3-0 deficit for a 4-3 team win Saturday over No. 7 North Carolina. With it, Clemson (20-5, 12-2 ACC) closed its regular season with three home wins in its final four matches — three of them against top-16 opponents — as it shifts focus to the upcoming ACC Tournament. Tigers head coach Nancy Harris reflected on her team’s growth over that span after the match, and said she’d issued the players a challenge to respond after their only two conference losses of the season to Virginia and Miami. “They stepped up and met that challenge,” she said. “North Carolina is a tremendous team, and so is Duke, and to beat those two is unbelievable.” It would have been tough to top Thursday’s win over top-ranked Duke for dramatic value, but Clemson certainly did its best. Behind 3-0 after dropping the doubles point and courts one and two in singles, the odds looked bleak to build on that win by upsetting the Tar Heels, too. With Gumulya and Tristen Dewar both behind in the third set on courts three and four, respectively, it looked like the match — forced inside due to rain — might be over before courts five and six really got going. Instead, Dewar rallied to beat Whitney Kay, 6-4, 1-6, 6-4, and by the time Gumulya came back to force a third-set tiebreaker with No. 46 Carolyn Price, Jessy Rompies and Joana Eidukonyte were already up a set for the Tigers on five and six. “I knew that it all depended on me,” Gumulya said. “I knew that Romy (Koelzer) and Yana (Koroleva) had lost their matches, and I knew that Tristen was also tied, so I was thinking, ‘OK, I just need to try my best, and we’ll see if I can win or not.’” The junior from Indonesia quickly seized control of the tiebreak, and after failing to convert on three match points, put Price away to take the match 6-3, 4-6, 7-6 (8-6). “Last year Bea was always kind of the comeback kid,” Harris said. “This year, she has had a good season, but I think she wanted a better season — and I don’t think it gets any better than that.” And with her win, a victory that looked improbable for the Tigers, if not downright impossible, was suddenly very much in reach. Rompies and Eidukonyte finished off their opponents in straight sets to secure the team victory and put Clemson in position to tie for the regular-season ACC title pending Sunday’s results. The win also gave the team’s lone senior, No. 1 singles player Koroleva, a victorious farewell in her final regular-season match at Hoke Sloan Tennis Center. Harris called Koroleva “truly one of the greats” in the annals of the program and said she had set an example for her teammates both on the court and off it. “That’s what you see in all the great champions: They always want more,” Harris said. “She’s had a tremendous career. She didn’t have a great day today, but she was happy for her team to win. To go out on Senior Day with a win over North Carolina and a win over Duke was wonderful. And her performance against Duke was just unbelievable.” ACC Tournament pairings will be announced Sunday night. The event begins in Cary, N.C., on Wednesday, but by virtue of Georgia Tech’s win over Duke Saturday, the Tigers have locked up a top-four seed, which comes with a double-bye reward.  As they turn their attention to the ACC Tournament, Gumulya admitted that beating two of the nation’s top seven teams would be a boost to their confidence, but said the Tigers couldn’t afford to get carried away in that regard. “Obviously we want to win the ACC, but we can’t think about it too much,” Gumulya said. “We just have to think match to match, and then after we win one, go for the next one. We need to believe we can win it, but we have to play it match for match.”