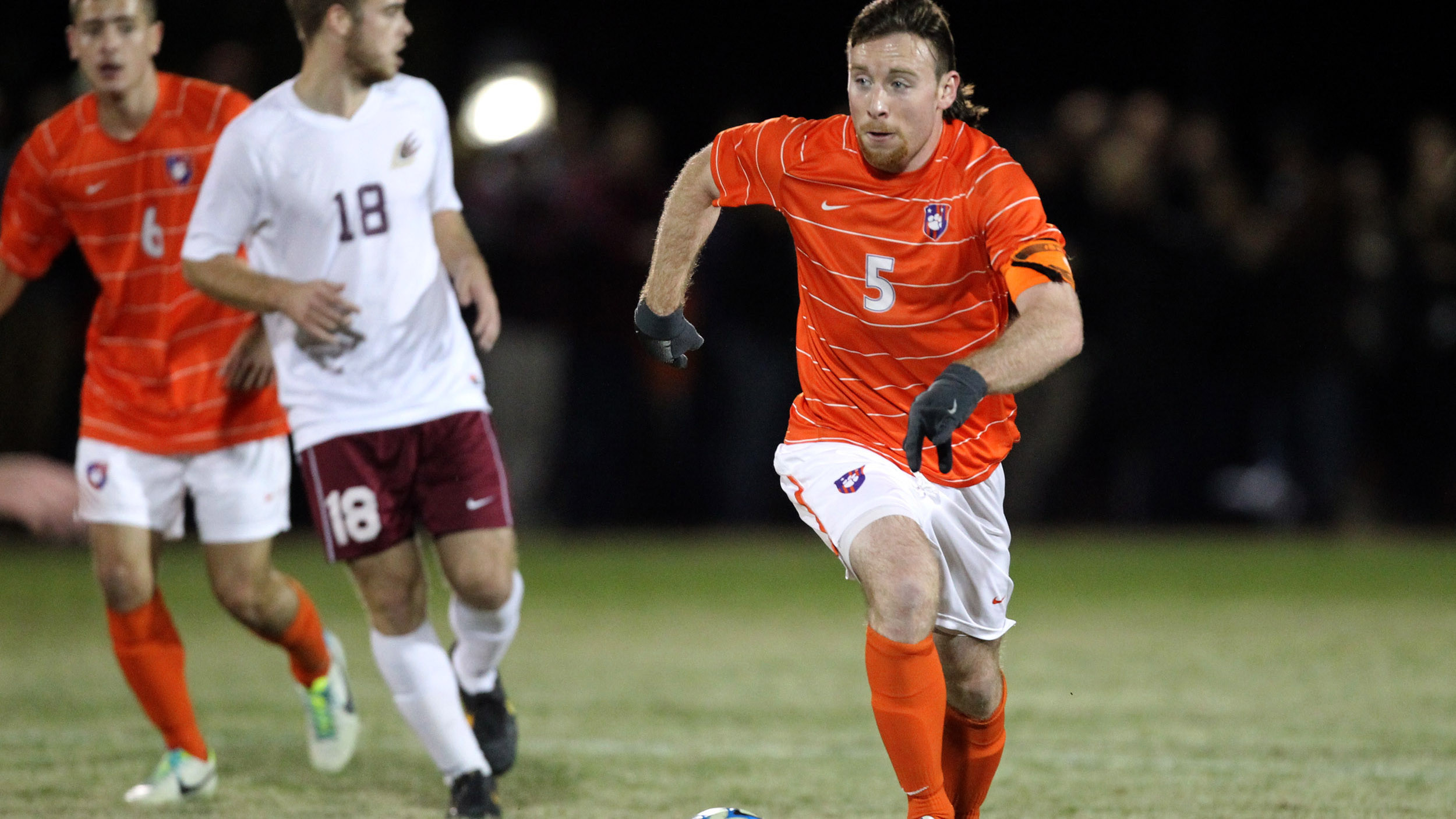 ELON, NC – With his team trailing 1-0 in the 63rd minute of its NCAA Tournament match Thursday night at Elon, Mike Noonan stood up from the folding chair he had been perched on near the end of the Clemson bench, turned away from the pitch and kicked at the grass near the chain-link fence.

“How many goals are we going to miss?” he shouted under his breath.

It was that kind of night for the Tigers, as a season of progress ended in heartbreak.

They did ultimately even things up at 1-1 at the 69:49 mark on a lovely curler from Thales Moreno from outside the box, but were unable to score through the rest of the second half and two overtime periods and fell 4-1 on penalty kicks.

“Obviously this is a difficult way to go out of the tournament and end a season,” said Noonan, the Tigers’ head coach. “But mostly, I’m very, very proud of my team. It was a special team at Clemson for us.”

The match was played in front of a capacity – and then some – crowd at Rudd Field, as the Phoenix were hosting their first-ever NCAA tournament match and their fans showed up in boisterous support.

But Clemson dominated both the possession and the chances in the early going, as it had eight shots in the first half to one for Elon and won six corner kicks while only giving one away.

Controlling the game is one thing, but the Tigers were unable to break through on the scoreboard before halftime.

“Regardless of if it’s going in or not going in, you’ve just got to keep going,” graduate midfielder Thomas McNamara said. “That was our mentality, and we kept creating more and more, and unfortunately, they weren’t going in at the time.”

As he noted, the Tigers were unable to convert on their early dominance, and Elon turned the tide to open the second half.

The Phoenix got the breakthrough with 31:09 to go, as Jason Waterman was on the end of a nice passage of play inside the box and slotted a shot into the lower corner from eight yards out for the opening score.

“I thought Elon took control of the first bit of the second half and got their reward when they scored the goal,” Noonan said.

Clemson finally got its goal – a deserved one – in the 71st minute when fullback Jack Metcalf controlled a ball down the right flank, cut it back into the middle and perfectly teed up a ball at the top of the box for Moreno, who curled it with his left foot into the top corner.

“There are ebbs and flows in every game, and I felt we took the game back and got our reward with the equalizer,” Noonan said.

But the two teams never scored another goal through the rest of regulation and two 10-minutes overtimes, and the Phoenix advanced to the next round 4-1 in penalty kicks.

“We’ve practiced (penalty kicks), obviously, and I’m sure they’ve practiced,” Noonan said. “Sometimes you don’t practice, and it goes better. It really is a crapshoot when you get to that point, and you’ve got to congratulate Elon. They were better from 12 yards out than we were tonight.”

Still, the season was a considerable step in the right direction for Clemson (11-7-3), making its first NCAA Tournament appearance since 2006 after advancing to the semifinals of the ACC Tournament.

“It meant a lot,” sophomore defender Kyle Fisher said. “That was one of the big goals at the beginning of the season. It’s unfortunate the way it ended, but I couldn’t be more proud of the guys I got to play with and the four seniors and the guys that have come before us that have helped pave the way to get us where we are now.

“It’s helped change the story. That’s been our motto this year, and we hope to be back next year.”

McNamara, the team’s lone first-team All-ACC selection, transferred to Clemson for his final season of college soccer after graduating from Brown, where he had been originally recruited by Noonan.

After leading the Tigers with seven goals and eight assists, McNamara couldn’t help but reflect on the season as a success.

“It’s been awesome,” McNamara said. “We had a great year. We started really strong, everything was a lot of fun, and it was going real well. We hit some difficult times, and I think at the end we came out a better team for it.

“It was great to just get one more year of college soccer, and I was just so thankful to do it here at Clemson and with the guys and the coaching staff I was doing it with.”

The Tigers bowed out of the NCAA Tournament despite outshooting the Phoenix 19-12 in the game and largely controlling the run of play for most of the night.

“On par if you looked at it did we have maybe better chances?” he asked rhetorically. “But that doesn’t count. What counts is Elon’s advancing, and we congratulate them. And we unfortunately have to end a season with a special group of people and a special team – and that hurts.