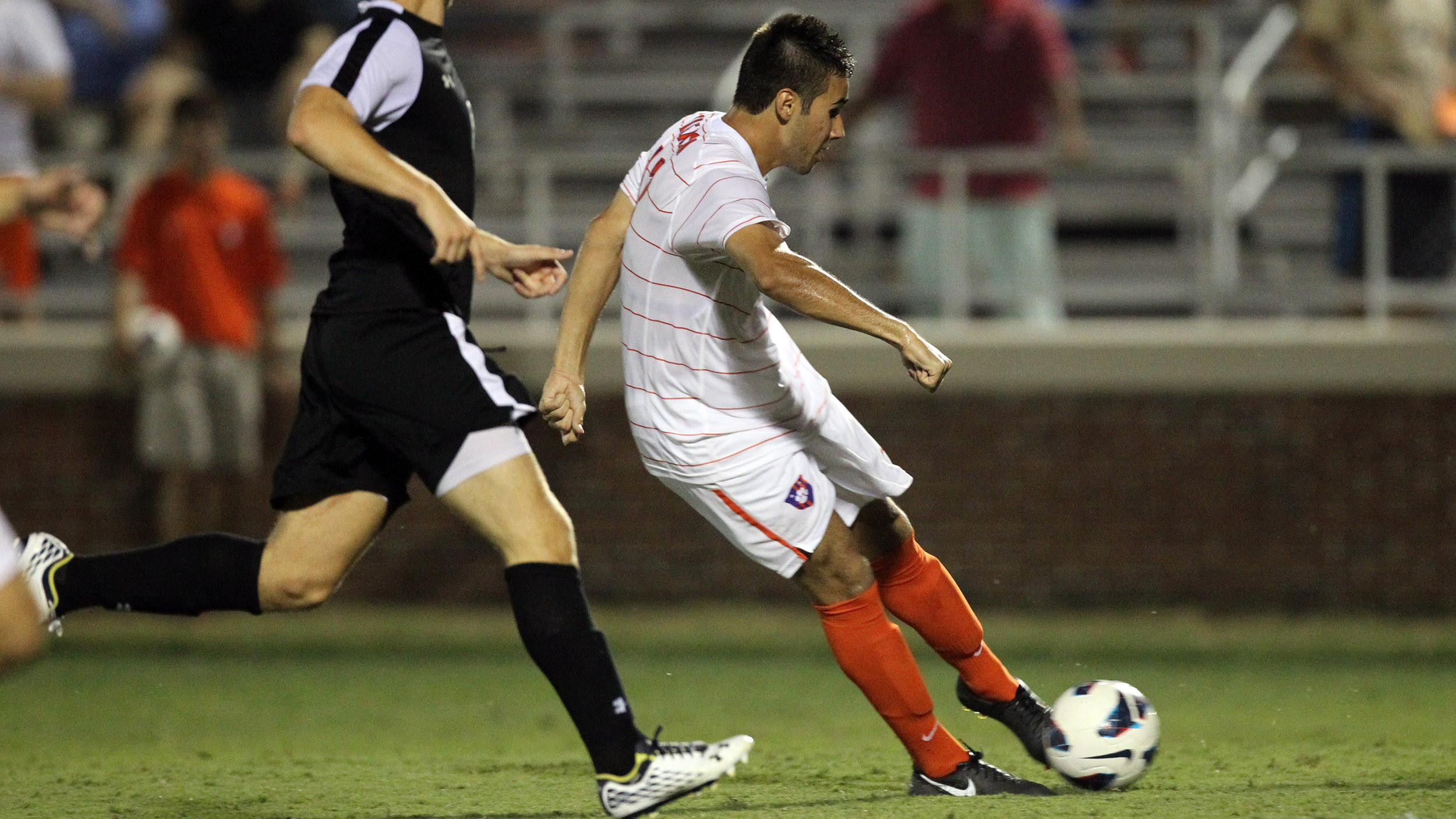 CLEMSON, SC – A native of Brazil who just arrived on Clemson’s campus in July, Thales De Mello Moreno got a quick primer from his Tiger teammates Sunday on their rivalry with South Carolina.

One day later, he made his mark on it.

After the Tigers let a first-half lead slip away after halftime and the match went into overtime, Moreno scored the golden goal on a left-footed drive from the top of the box that nestled into the bottom corner 1:36 into the second extra stanza to lift Clemson to a 2-1 win Monday night at Historic Riggs Field.

“It was a great moment,” Moreno said. “It was the best moment for me in Clemson so far.”

Of course, “so far” amounts to exactly nine weeks.

The Tigers (2-0) went ahead during the 23rd minute when Thomas McNamara scored his second goal of the season on a penalty kick after the Gamecocks were called for handball in the box.

But after an early barrage of chances, Clemson’s momentum dwindled, and South Carolina was able to push the action more consistently into its attacking half. It scored the equalizer in the 55th minute off a corner kick, which Mahamoudou Kaba headed home to tie the score 1-1.

Clemson regained control of the run of play late in the second half and pushed for a winner in regulation, but came up empty through the end of the first 90 minutes and the 10 minutes of the first overtime.

“What I was really proud of the team for was they got a grip of the game again,” Tiger head coach Mike Noonan said. “They brought it back to the way that Clemson wants to play soccer, and those are signs of a maturing team.”

In the 102nd minute, the ball fell to Moreno’s feet just outside the box, and he fired a shot through his defender’s legs and past keeper Robert Beebe for the walk-off win.

“We had gone from side to side and we had spread South Carolina’s defense, and Thales got into the gap,” Noonan said. “When you put him on to his left foot, you’re at your peril. He’s dangerous. The guys were all saying that’s his sweet spot. We’ve seen him score many times like that in practice.”

Moreno hails from Monte Santo de Minas, Brazil, but came to Clemson more directly from Montverde Academy in Montverde, FL, where he was coached by the only athletic and academic All-American in the history of Clemson’s program, Mike Potempa, who is also a former Tiger assistant coach.

Moreno – whose full name is Thales De Mello Moreno – is one of three Tigers who played at Montverde, along with fellow midfielder Alexandre Rome’o Happi, who also took part in Monday’s win, and defender Mauriq Hill, who has been injured.

All three are freshmen who played together on Montverde’s National Championship team in the 2012-13 winter season, and Moreno was named Gatorade Florida Boys Soccer Player of the Year.

Raised in soccer-crazed Brazil, Moreno has been playing the game “since (he) was born” and was a star on the Paraiso Futsal team, as well as playing for Palmeiras – a Brazilian football club from Sao Paulo – as a youth.

He came to the United States to play soccer two years ago and eventually made his way to Clemson for a visit to campus.

“I came here to visit, and I liked it a lot,” Moreno said.

He arrived on July 1 to enroll in summer school and begin training. Moreno speaks English well enough to attend classes, as well as answer the questions of reporters moments after his game-winner, obviously, but it’s clear he’s not totally comfortable with the language just yet.

“It’s funny because sometimes in our meetings and stuff, I’m asking Thales, ‘Do you understand?’ And he’s nodding his head,” Noonan said. “He’s not convincing that he completely understands – but when it comes to soccer, it’s a universal language.”

The goal was the first of his Clemson career, but he is already playing a significant role on the team, being trusted enough by Noonan to handle many of the corner kicks and free kicks, particularly when leading scorer McNamara is not on the field.

“We’re deeper than we’ve been in the past,” Noonan said. “Tommy ran out of gas, and we were able to substitute him with the eventual goal-scorer. Thales is a young talent, and those are the types of things we brought him to Clemson to do.”

And he did it against the school’s biggest rival Monday, netting the walk-off winner to keep the Tigers unbeaten and untied on the season ahead of Friday’s Atlantic Coast Conference opener against Virginia.

“The rivalry is one thing; that’s for a lot of people outside our team,” Noonan said. “What we did tonight was win a game for our team and for Clemson. It’s an important rivalry, there’s no question. It’s fun to be a part of it. But … the emotion didn’t get too much for the players, and that’s why I think they were able to regain their composure and eventually win the game.”