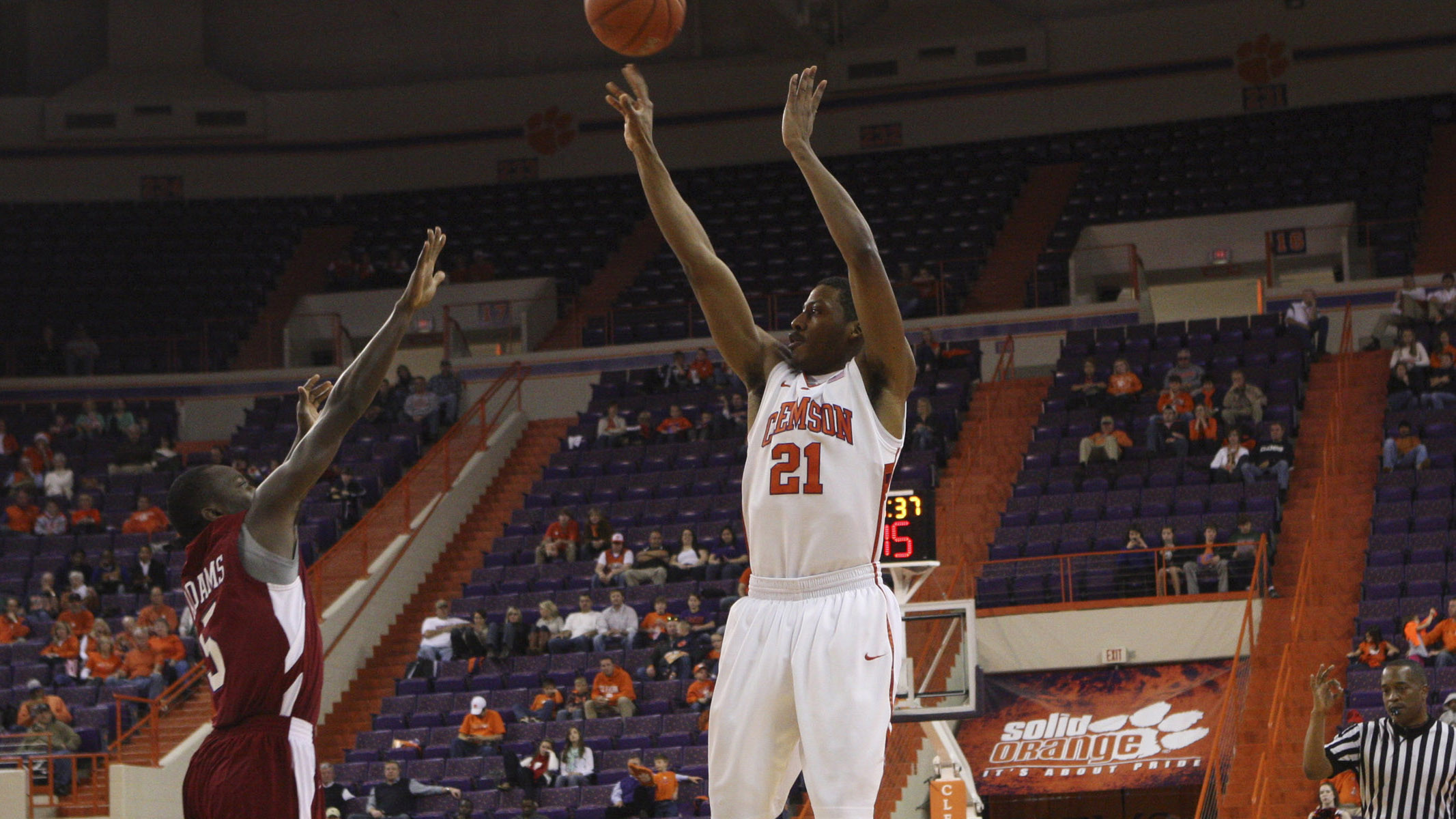 CLEMSON, SC – Brad Brownell had to get onto Damarcus Harrison for passing up an open shot in the early going Sunday against South Carolina State. To his credit, Harrison didn’t need to be reminded again.

“No, he didn’t,” Brownell said. “He pretty much started feeling it. I asked him at one of the timeouts if his arm was tired.”

Harrison scored a career-high 15 points as Clemson pulled away for a 77-41 victory over the in-state Bulldogs. He made 6-of-11 field goals, including 3-of-7 from long distance, and also added a career-best six assists.

“Once he tells you to shoot it, you’ve got to shoot it then,” Harrison said. “You’ve got nothing to worry about – because he wants you to shoot. I just had confidence in my shot and my release, and I made a few today.”

Confidence was something Harrison admitted he had been struggling with of late, as he’d made just 3-of-22 attempts (13.6 percent) from behind the arc coming into the game. But Brownell believed Harrison’s woes had more to do with his form than his head, and had been working with the sophomore to fine-tune his technique.

“He gets the ball back a little too far behind his head, and we’ve been trying to keep his shoulders forward so he can shoot the ball a little more in front,” Brownell said. “He’s got a high arch to his shot, but he has a good release point; he just sometimes can get a little lazy with it and get it behind him. It’s not easy to work on things like that during the season, but it’s something we’ve needed to do and we believe we’re making progress.”

Harrison’s outside shooting couldn’t have come at a better time for the Tigers (7-4), who missed their first seven attempts from long distance Sunday and fell behind 16-15 with 8:55 left in the first half.

That cold stretch in itself would not have been a concern were it not for the 4-of-21 three-point shooting effort Clemson had earlier in the week in a loss at Coastal Carolina.

“We went hard with very competitive practices after the loss,” Harrison said. “We came home around 2:30 in the morning, practiced at 11 and practiced again that same afternoon. So, we went after it just to get our stride back, so we don’t have those upsets happen again.”

The Tigers left little doubt of that by halftime Sunday. After State took its last lead of the day at 16-15, Clemson closed the first half on a 21-2 run to seize control.

The run was highlighted by a pair of alley-oop dunks by K.J. McDaniels – the first a reverse finish off an Adonis Filer pass that made it 22-16 and the second from near mid-court from Rod Hall and slammed home by McDaniels to give the Tigers their largest lead of the first half at 36-18, which was the score they took into the break.

But while McDaniels’ slams drew the biggest cheers, it was on the defensive end that the Tigers dominated the first half.

The 18 points Clemson held South Carolina State to in the first half were the lowest by any opponent this season, as they Tigers forced 13 first-half Bulldog turnover and turned them into 18 points on the other end.

The second half was little more than academic, as Clemson led by as many as 39 in the closing minutes.

Harrison, a sophomore transfer from BYU, surpassed his previous career-high of 12 points, which he scored against Iona in last year’s NCAA Tournament for BYU, to lead four Tigers in double figures.

“I have good chemistry with my teammates; it’s just a confidence thing I’ve got to get,” Harrison said. “I was having trouble with it at the beginning, and I believe I’m finding it now, getting in a good rhythm, knowing when to take my shots and when to pick my spots to score.”

Clemson had 22 assists on 30 baskets, the most assists in 76 games under Brownell, and all 11 players on Clemson’s roster that played scored in Sunday’s game.

As for Harrison, Brownell said Sunday’s 15-point, six-assist, three-steal outing was an example of the kind of production he was capable of.