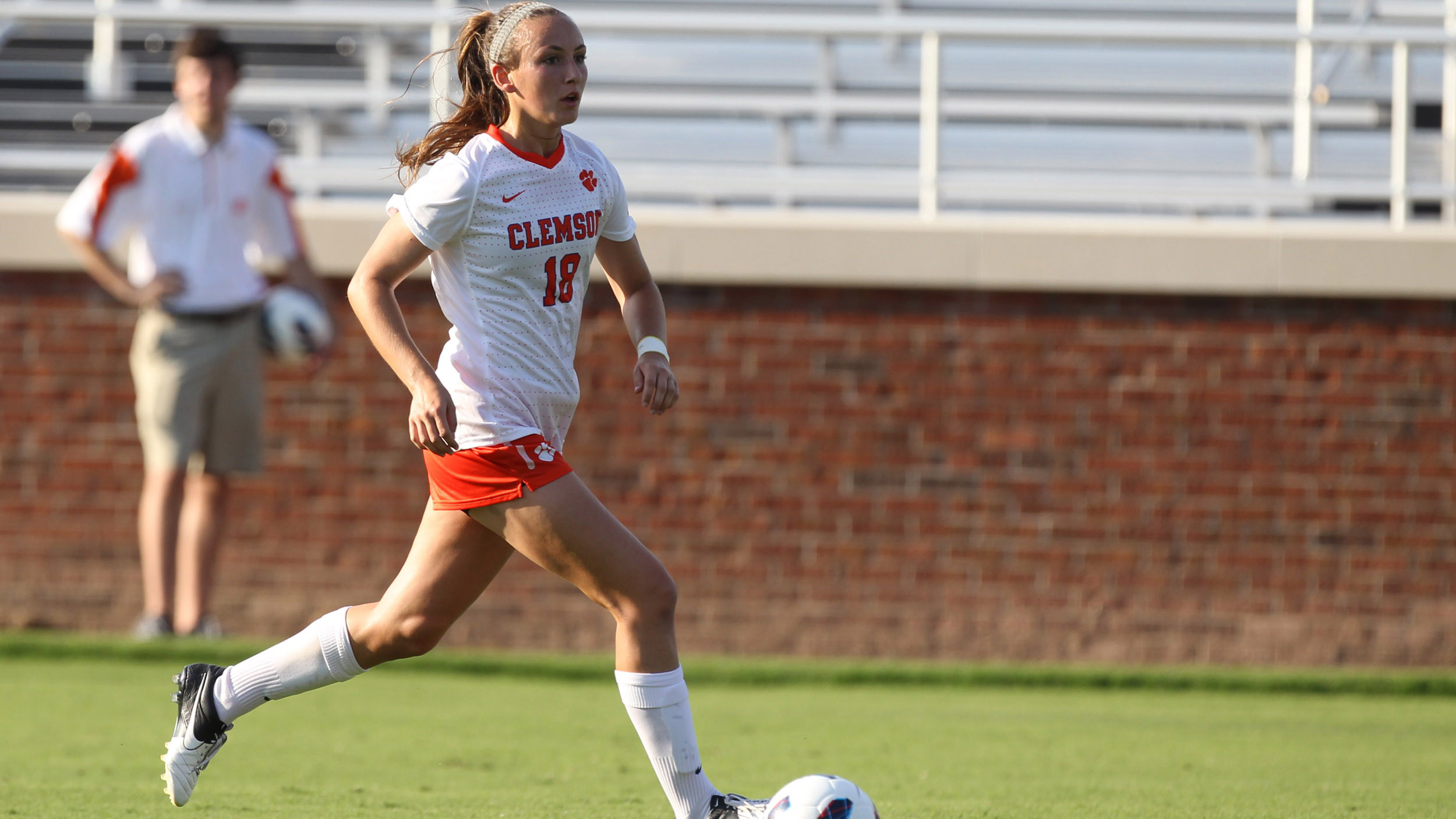 She repeated the trick Sunday in her debut on Radwanski’s current home field.

Playing her first home game as a freshman at Clemson’s Historic Riggs Field, Atanda pounced on a rebound in front of the net and banged it home at the 54:30 mark for the lone goal in a 1-0 win over Furman.

“We came out really strong in the second half,” Atanda said. “We knew that we had to stay composed, and we did exactly that. Furman is a really good team, and they gave us a lot of challenges. But we pressed them high early on, and eventually we found that goal we were looking for.”

Atanda was just one of nine freshmen who played for the Tigers (1-0-1) in the win, and three of them, defenders Gabby Byorth and Claire Wagner and keeper Kailen Sheridan, started and played all 90 minutes.

For the Clemson defense, it was the second straight clean sheet to open the season, as the team had battled 2012 NCAA Tournament participant Auburn to a scoreless draw on the road Friday night.

“It was positive to get two clean sheets, and we didn’t lose a game,” Radwanski said. “I’ll take the Auburn result because we played a good SEC team, and we were on the road and had to deal with some adversity. Actually I thought we played better down there than we did here tonight in terms of moving the ball.”

The adversity the Clemson head coach referred to was a lightning delay of an hour and a half prior to the game at Auburn. After 110 minutes of scoreless soccer, that left the Tigers arriving back home in Clemson around 5 AM Saturday morning – which obviously made for a quick turnaround for Sunday’s game.

Still, the players, and particularly the freshmen, were excited to play on their home pitch for the first time this season.

“It was amazing,” Wagner said. “The crowd here was awesome. It was unreal. When we walked out of the tunnel and they were calling out the names, it’s awesome to be able to play for such a cool crowd. Unbelievable.”

Sheridan and Wagner were the headliners of a ballyhooed signing class for Clemson that Radwanski called “a great injection of talent” into his squad.

The duo was named to the TopDrawerSoccer.com Preseason Best XI Freshmen team for the 2013 season. Clemson was the only school to have two players named to the 11-member team.

“Honestly the whole precipice was when we got Claire to commit and we got Kailen to commit, and that gave us instant credibility,” Radwanski said. “You can just see those two, they’re very calm and composed on the ball. They’ve played at a level that a lot of other players haven’t.  These two have played for their national teams; they’ve been at World Cups – what a great experience that they bring to our table. … I’m proud of the recruiting class. It’s the best recruiting class I’ve ever had – but we needed it.”

On Sunday, Clemson outshot Furman 25-7 on the match and took eight corner kicks to the Paladins’ two, but the Tigers didn’t get the breakthrough they were looking for until their 18th shot of the game, when Atanda poked home the rebound after Tori Andreski – another freshman – had fired from just outside the box.

The goal actually marked just the latest in a string of game-winners that Atanda has scored dating back to her days at Montgomery (NJ) High School, where she netted the decisive goals in both the state semifinals and state finals in helping her school win four straight state championships during her career.

“Catrina has a lot of good attacking qualities and she’s a different type of player, and I’m glad she’s with us,” Radwanski said. “I felt good for her to get that goal tonight because she brings something a little bit different. Whenever you bring a recruiting class in, especially one that has 11, each of them brings kind of a unique talent.

“And then the fun part is trying to bring that cohesiveness together, so that you can get their talents to stand out. So we’re still in the learning process of getting people settled in and bringing out the best in their games.”

With so many newcomers making contributions for the Tigers, Atanda pointed out a big part of that has been the veteran players making them feel right at home.

“The upperclassmen have treated us very well, and they’ve made us feel part of this team, like a family,” Atanda said. “They did a really good job welcoming us and making us feel comfortable.”

As for the freshmen, Wagner said a bond had started building between the members of the signing class during a camp on campus last summer.

“We found that a lot of us were clicking automatically,” she said. “Then we came to our official visit, and we spent more time together. And then as we came in, we all came to summer school, and we just started right from the beginning. We were all fit, we all had our spring packets we had worked on, and we were really willing to come in and make a change to the program.”