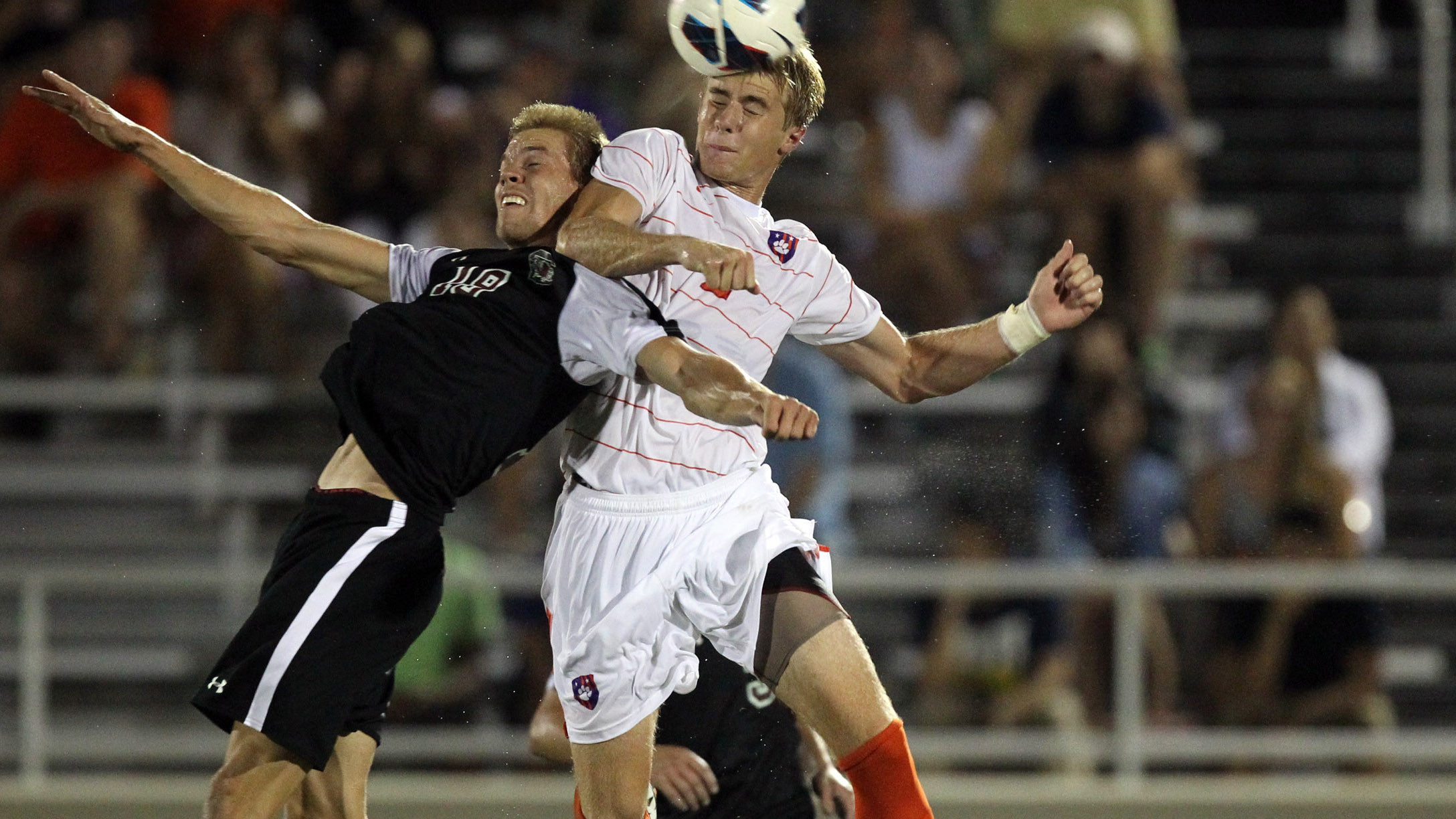 EXCLUSIVE: Fisher among Homegrown Talent at Heart of Tiger Team

CLEMSON, SC – Glance down the Clemson men’s soccer roster, and you’ll see players from the United Kingdom, Brazil, France and all over the United States.

Head coach Mike Noonan clearly understands the need to have the best talent at his disposal, but he points out there is also something to be said for having players with an innate understanding of the traditions of your program at the heart of your team.

“A lot of successful teams throughout the world, the spine and the backbone to their team – there’s a lot of high-paid millionaires playing the game, but if you look at Manchester United, most of the spine of the team are British-born players,” he said.

But Noonan’s point had nothing to do with British-born players – even though he had three in the starting lineup against USC Upstate on Tuesday – and everything to do with homegrown talent.

That’s why, if you look down the center of the pitch during a given match at Historic Riggs Field, you’ll see a slew of players from the state of South Carolina.

Two of those players are center back Kyle Fisher and midfielder Ara Amirkhanian, and those two players were responsible for Clemson’s two goals in its 2-0 victory over Upstate.

Fisher grew up down the road in Easley and came to Clemson soccer camps as a kid. When he was older, Fisher would come to matches at Riggs and study the players he hoped to emulate at center back, players who could not only defend, but also make themselves part of the attack when the opportunity arose – like Greg Eckhardt did during the 2006 team’s run to the Sweet 16, he pointed out.

With the game still tied 0-0 in the 22nd minute Tuesday, Fisher broke the deadlock with an emphatic header off a set piece. He started at the edge of the box, made a run down the center as Tommy McNamara struck his corner kick, rose above the horde at the edge of the six-yard box and nodded the ball home over the keeper.

The goal was the first of Fisher’s career at Clemson, although he had two assists as a freshman last season, when he started all 20 matches for the Tigers, and had scored against Coastal Carolina in the preseason.

“It felt good getting my first goal at Clemson,” Fisher said. “I always wanted to come here as a little kid, and to be out here on the field where I watched the guys before me at center back score goals is good. And it feels good to do that and get the win, but overall the performance has got to be better as we move into taking on Virginia Tech this weekend.”

The Tigers outshot Upstate 15-2 and took 10 corner kicks to the Spartans’ one, but didn’t quite manage to put the game away until soon after halftime, when Manolo Sanchez led Jack Metcalf on an overlapping run down the edge of the box. Sanchez hit a perfect cross to the back post, where a diving Amirkhanian arrived to meet it with his head to make it 2-0 at the 48:25 mark.

“They were two very good goals, but that’s one of the puzzling things right now that we have to continue to improve in practice – and that is that we’re capable of that,” Noonan said. “The goal we scored against Maryland (on Saturday) was very, very nice and well constructed, and these two goals tonight were well constructed. We know we’re capable of that, but we’ve got to do it more often.”

Noonan said part of the reason he recruited Fisher was his ability to score goals in the air like he did Tuesday. But as a central defender, his first job is obviously to stop the other team from scoring.

Fisher and the rest of the Tiger defense have been doing that job extremely well this season. The win over USC Upstate marked their sixth clean sheet in eight games this season, and they had allowed just one goal in six games prior a 3-1 loss to Maryland.

Fisher and junior Phanuel Kavita have started all eight games together as a pairing at center back and clearly have played well together, but Fisher said he believed they still had plenty of room to grow moving forward.

“I’ve learned a lot from him,” he said. “I came in as a freshman last year, and the guy that was before me, Francklin Blaise, he helped me out a lot, and the three of us worked together. On the road, we always talked and worked on getting better … and it’s starting to click this year. The chemistry between me and Phanuel is good, but it can still be a lot better.”

With that, Fisher knows the Tigers will need to be much better as they get set to go on the road to Virginia Tech on Friday before games against two of the nation’s top teams in Notre Dame and North Carolina on Oct. 5 and Oct. 8, respectively.

Still, Fisher was able to walk away from Tuesday’s match feeling good after scoring his first goal on the pitch he grew up dreaming of playing upon.

“We want to defend Riggs, and we want to make this a hard place to play,” he said. “When we can get a result here it’s always good because one of our goals is just to defend our home field.”

Spoken like someone for whom Riggs truly is a home field.