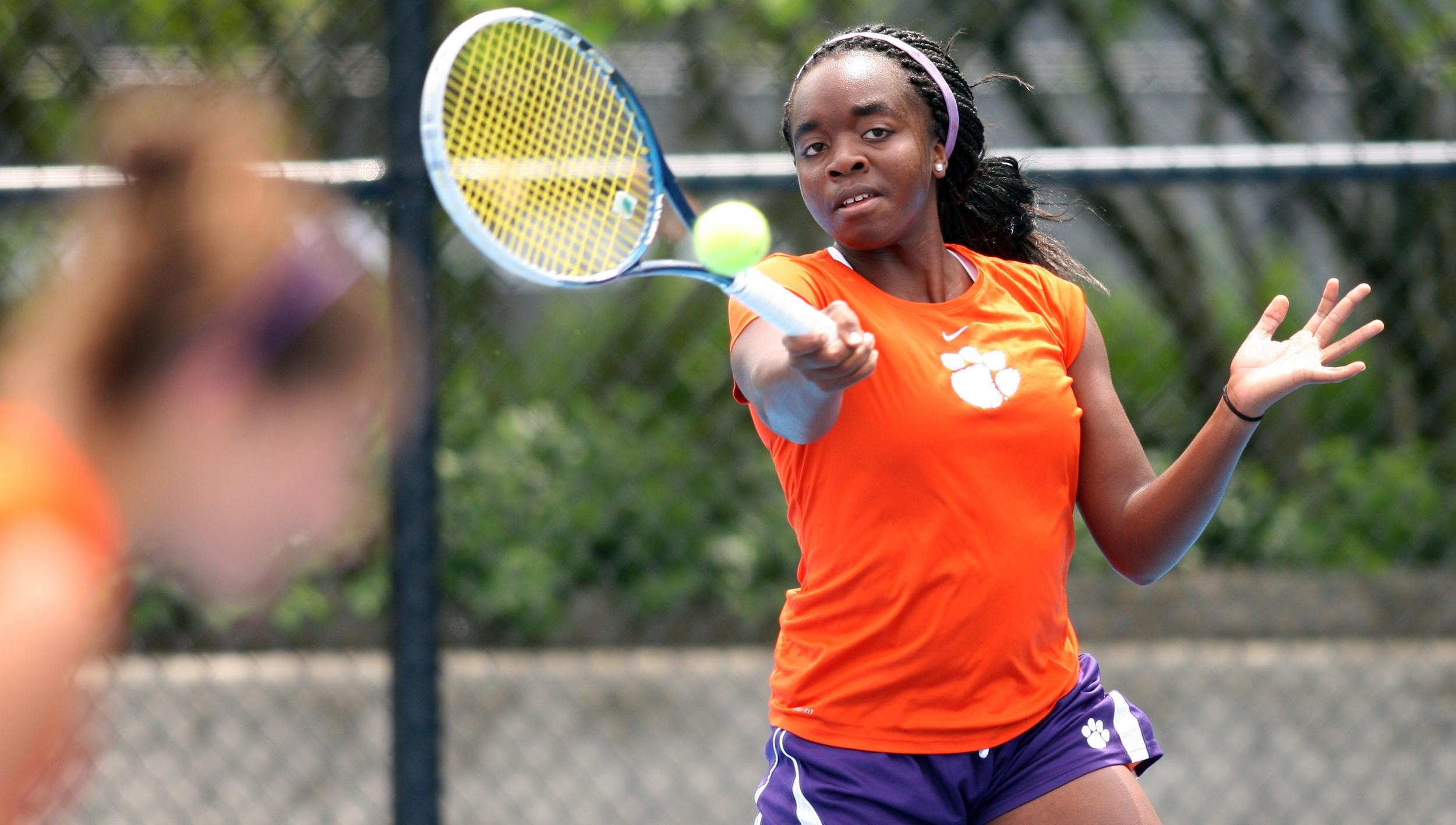 Clemson and Georgia will renew their rivalry on the gridiron Aug. 31 at Death Valley after a decade-long hiatus, but the one between the two women’s tennis programs has been going strong all along. The Tigers and Bulldogs have met in the regular season each of the last 22 seasons, and Friday, they will lock horns in the NCAA Tournament for the third time in four years for the right to advance to the national quarterfinals. “I think Clemson and Georgia have a very, very high level of competitiveness,” Tigers head coach Nancy Harris said Thursday after her team finished its final practice in preparation for the match. “When we beat Georgia, people are delighted and we get notes that say, ‘Congrats, that was a huge win.’ We’ve been competitive with them over the last several years, and I do think it’s a big rivalry.” The competitive nature of the recent meetings has only served to make the past two defeats at the hands of the Bulldogs all the more heartbreaking for Clemson. The Tigers fell at home to Georgia 5-2 on Feb. 2 in a match that was closer than the final score indicates and were eliminated from last year’s NCAA Championships by the Bulldogs in a 4-3 thriller where Clemson’s Klara Vyskocilova held a resounding 6-0, 5-2 lead over Georgia’s Maho Kowase, only to see Kowase rally to force a third set and then win going away. The only two current Tigers who were a part of that match last season, sophomores Romy Koelzer and Beatrice Gumulya, both admitted the loss was a painful one. “We thought we were going to have that match at first,” Koelzer said, “then I finished first and then Bea finished and everything came down to Klara’s match. It was so emotional because we really wanted to come to the Sweet 16 and it was so close, 3-all, and then it was a three-setter and Klara was cramping. It was just awful. It was heartbreaking.” By no means has the rivalry been a one-sided affair, however. While the Bulldogs hold a slim 24-22 lead in the all-time series — courtesy of the two aforementioned victories — Clemson bounced Georgia from the 2010 NCAA Championships in the regional final at the Hoke Sloan Tennis Center to prevent the Bulldogs from taking part in the Round of 16, which was being played on their home campus that year. “Of course, South Carolina is the biggest rival that we have, but I think because they are so close and we are playing them every season, I think you can count them as one of the biggest rivals that we have,” Koelzer said. Only two Tigers were able to win their individual matches against Georgia earlier this season, Gumulya and Ani Miao, a fact that seemingly doesn’t bode well for Clemson since five of the six singles matches will pit the same players against one another. Gumulya, who will hope to duplicate her 7-5, 6-2 win over Silvia Garcia from earlier this season, said the outcome of that previous meeting doesn’t necessarily predict the winner of this one, however. “It’s kind of different because when we played them earlier this season, we played indoors,” Gumulya said. “So I don’t know how this girl is going to play outside. She might be playing better outside, I don’t know. But it might also be an advantage for us because (as a) team we lost this match when we played indoors. So it might be good also for us when we play outdoors.” But to flip the script on Georgia, the Tigers know at least two of them must reverse the outcomes of their matches. Koelzer, who lost in three sets to Kate Fuller after winning the first set, believes she and her teammates can learn from the mistakes that kept them from winning that last time. “We watched the videos of my opponent, and I studied her a little bit,” Koelzer said. “I also remember her weaknesses, and I’m going to go for those tomorrow.” Harris agreed it was possible for her team to get the better of Georgia, and indicated one reason for that is her squad, comprised of three sophomores and four freshmen, has grown by leaps and bounds since the last time they met the Bulldogs. “Liz (Jeukeng) was close to winning (last time against Georgia),” Harris said. “Yana (Koroleva) is playing better tennis and is a little bit more familiar with that player (Lauren Herring, the No. 6 seed in next week’s NCAA singles championships).  “Bea has always been really, really solid, and I think we’ve developed more on the bottom of the lineup. We’re better in doubles. So I really think tomorrow’s match is going to come down to the grit, the desire and the determination, and that’s what college sports is all about.” It is also about rivalries, and Gumulya admitted that the Tigers’ recent history with Georgia has only stoked their fire to beat the Bulldogs this time around and show them that turnabout is indeed fair play. “Of course, I really want to beat them,” she said. “Last year, we almost beat them. So, anything is possible. There is nothing impossible. So, even though they are ranked ahead of us, we can still beat them.” Georgia is the No. 4 national seed in the field, while Clemson is No. 13. The winner of tomorrow’s 1 p.m. match will advance to face the winner of No. 5 Southern Cal and No. 12 Stanford on Sunday for a berth in the Final 4. While the Tigers and Bulldogs have met on an annual basis since 1990, no player on the current Clemson roster has ever been part of a win over Georgia, a fact they are hoping to change tomorrow. “Since Bea and I have been here, we’ve lost every time to them that we’ve played, so I think tomorrow is going to be the first time that we’re going to beat them,” Koelzer said with a laugh. 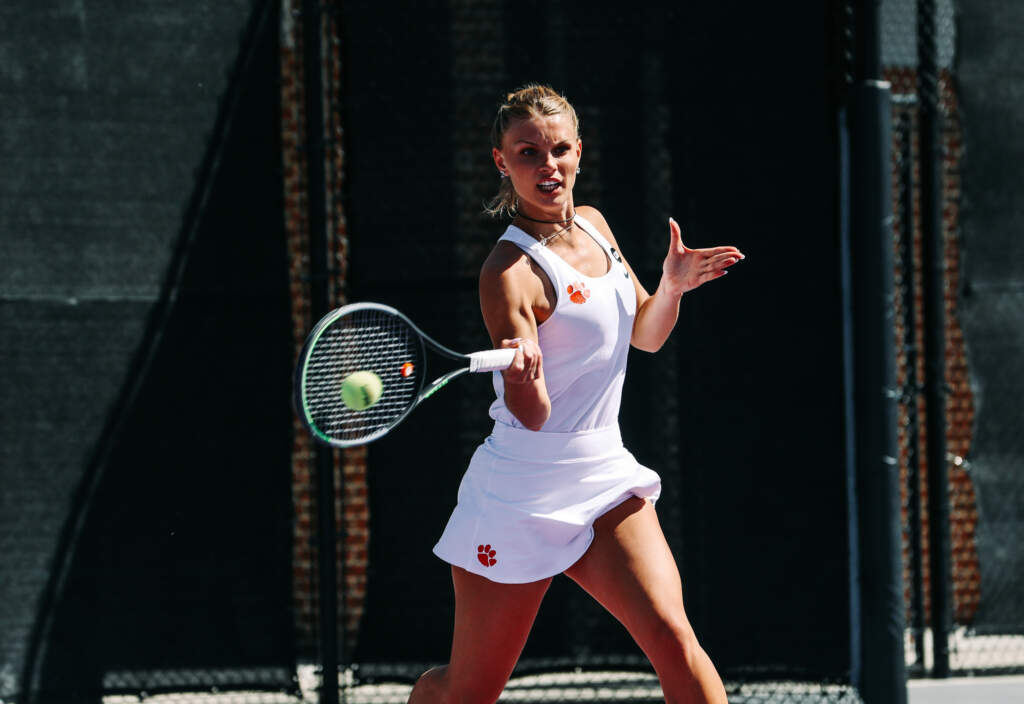