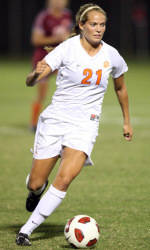 CLEMSON, SC – Clemson sophomore forward Maddy Elder has been named to the 2010 CoSIDA/ESPN Academic All-District Women’s Soccer Team as announced by the Academic All-America Committee on Tuesday afternoon. Elder, a Biological Sciences major, was named to the District 3 Third Team.

Elder led the Tigers in scoring in 2010 with five goals and three assists for 13 points. The native of Roanoke, VA started 13 of the 14 games that she played in this season, logging 957 minutes on the field. Two of Elders’ five goals were game-winners for Clemson.

Elder also led Clemson in scoring as a freshman in 2009, tallying 10 goals and one assist for 21 points. She was named to the All-ACC Academic Women’s Soccer Team in 2009.