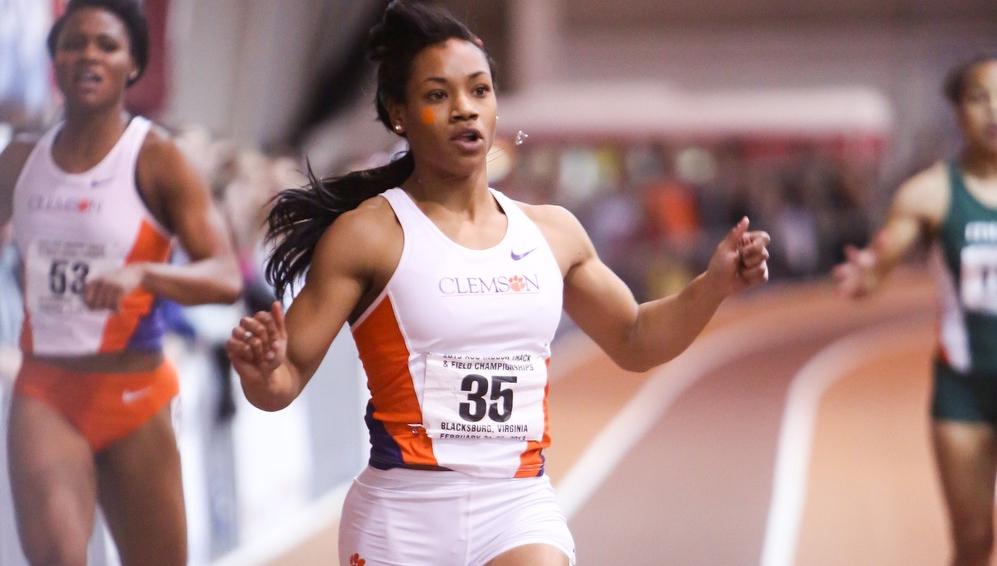 CLEMSON, SC – The official list of qualifiers for the 2013 NCAA Indoor Track & Field Championships was released late Monday. Clemson will be represented Friday and Saturday in Fayetteville, AR with eight student-athletes from its No. 5 ranked women’s program, and by five members of the 17th-ranked men’s team. It is the highest number of NCAA Indoor qualifiers for the Clemson men’s program since 2007.”We’re excited by the number of individuals from our program that qualified for this week’s NCAA Championships,” said Shawn Cobey, Clemson’s interim director of track & field. “It is particularly rewarding to know that our men have their highest number of qualifiers in several years. That is a testament to all the hard work that has been put in by the coaches and student-athletes. We look forward to an outstanding week of competition in Fayetteville.”Dezerea Bryant is the only Clemson athlete to be declared and accepted into two events. The sophomore out of Wisconsin is entered in both short sprints, the 60 and 200 dashes. She was ACC Champion in both for a second straight season, the only female in conference history to accomplish that feat. Bryant was a first-team All-American in both events as a freshman in 2012. She will be joined in the 60 by Stormy Kendrick, who qualified for a third straight indoor season in that event.Marlena Wesh made the cut for a third straight indoor season in the 400 dash. She was a first-team All-American last season in Nampa, ID. Wesh won the ACC crown two weeks ago in the event for a third straight time.Three Tiger females qualified in the 60 hurdles, led by NCAA record-holder Brianna Rollins. The Miami, FL native and 2011 NCAA Champion in the event would have qualified in the 200 dash as well, but she did not declare for that event and will instead focus on the hurdles. She will be joined by a pair of return qualifiers, sophomore Keni Harrison and fellow senior Jasmine Edgerson.Two field event athletes qualified from the women’s team, Jasmine Brunson in the triple jump and Brittney Waller in the weight throw. Waller owns the nation’s No. 2 seed mark heading into nationals, while Brunson jumped into the top 12 following a season-best 42’7.5″ effort in a silver medal showing at the ACC Indoor Championships. Brunson was eighth a year ago at this meet.From the men’s team, five different individuals qualified. Tevin Hester earned his first trip to the NCAA Championships in the 60 dash, the first for a Tiger male since Justin Murdock in 2011. Hester ran a personal best 6.64 in a bronze medal ACC finish.Brunson Miller is the first Tiger male athlete to qualify for the 400 at the NCAA Indoor Championships since Ato Modibo in 2002. Miller won the 400 dash at the ACC Championships with a time of 46.49, and improved his seeding with a time of 46.23 last weekend at Notre Dame.Spencer Adams and Marcus Maxey were both accepted into the men’s 60 hurdles. With his qualification, Adams is the first Tiger since Duane Ross from 1992-95 to earn a spot in the field all four seasons at the NCAA Indoor Championships in the hurdles. Maxey earned his first bid to the NCAA indoor nationals after recording a personal best 7.74 two weeks ago in the ACC prelims.Torian Ware is the lone Tiger field athlete from the men’s team to qualify for nationals. The sophomore out of Crawfordville, GA broke Clemson’s high jump record on Jan. 11 with a 7’5″ clearance. He is the first high jumper from Clemson to qualify for the NCAA Indoor Championships since Adam Linkenauger in 2006.