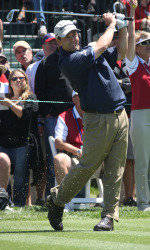 CLEMSON, SC – It was quite a day for former Clemson golfers in PGA Tour Events as eight former Tigers had rounds of 68 or better in three different events.

Tommy Biershenk had the best day with a 62 in the first round to hold the individual lead at the Cox Classic on the Nationwide Tour. That event in being played in Omaha, Nebraska. The native of Spartanburg, SC had seven birdies and an eagle on the 17th hole to record his nine-under-par score.

He has a one-shot lead over former Clemson teammate Elliot Gealy who had an eight under par 63 on Friday. Like Biershenk, he eagled the 17th hole to close his round in grand style. Former Tigers Charles Warren and Matt Hendrix both had four under par rounds of 67 in Nebraska, while Brent Delahoussaye had a 68.

Former Tiger Jonathan Byrd had a 67 in the first round of the WGC Bridgestone Invitational at Firestone Country Club in Ohio, while Lucas Glover had a two under par 68. Byrd stands in 13th place, while Glover is in 18th place tied with Tiger Woods.

Former Clemson All-American Ben Martin had a four under par 68 on Friday and stands in sixth place at the scenic Reno-Tahoe Open. D.J. Trahan shot a two over par 74.