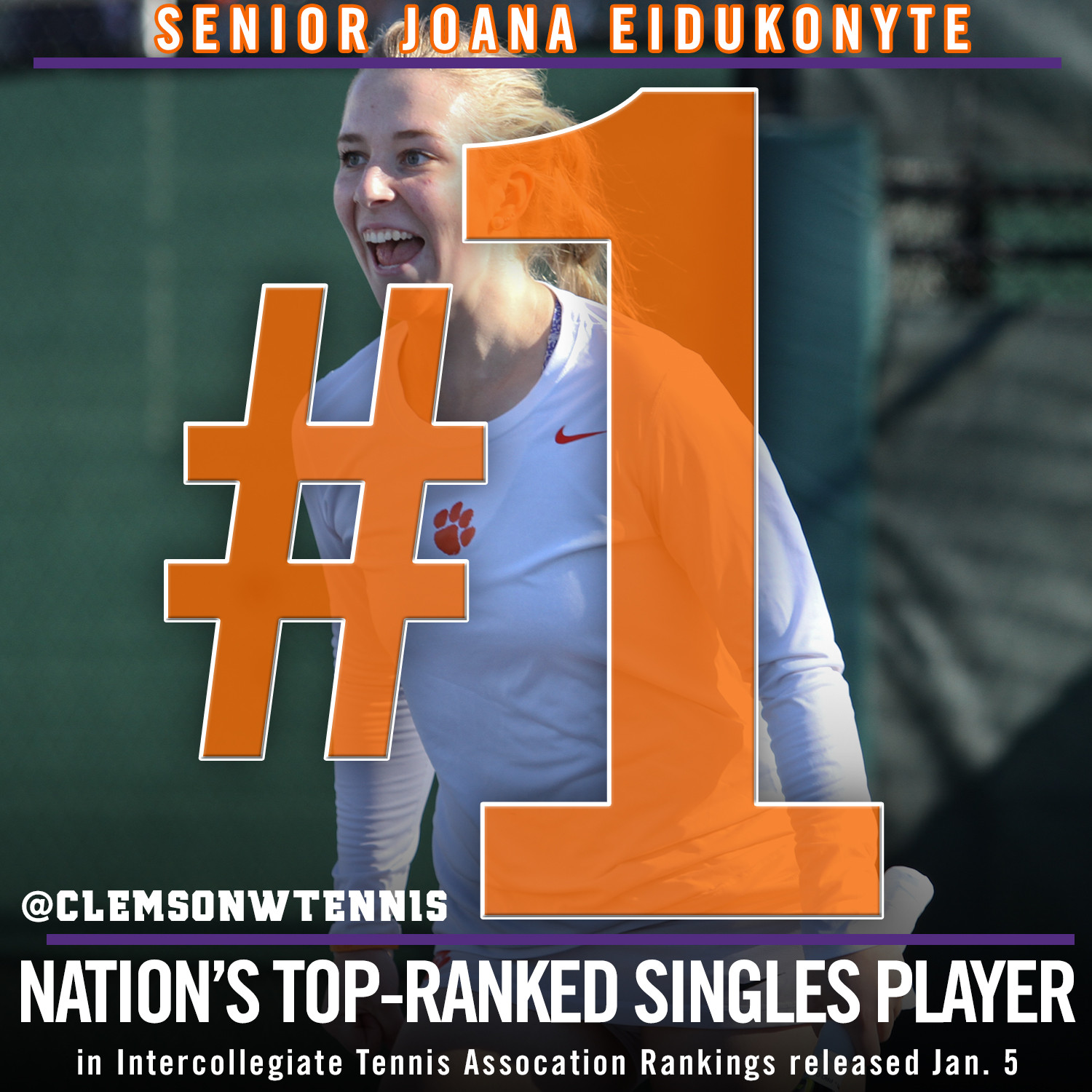 Eidukonyte Ranked No. 1 Nationally in Singles, Tigers Ranked 20th as a Team

CLEMSON, S.C. – After a fall season in which she reached the finals of the prestigious USTA/ITA National Indoor Intercollegiate Championships, senior Joana Eidukonyte opened the spring season as the top-ranked player in the nation in singles in the poll released by the ITA on Tuesday afternoon. In addition to Eidukonyte, two other Tigers singles players and one doubles team are ranked, while the Clemson team is listed at 20th in the nation in the first team poll of the season.

Eidukonyte was ranked 11th in the fall preseason poll released in September 2015, and went on to have an impressive fall season, reaching the finals not only of the National Indoor Intercollegiate Championships, but also of the ITA Carolina Regional singles draw. The native of Vilnius, Lithuania advanced to the semifinals of the inaugural Oracle/ITA Masters during the fall as well.

Two freshmen, Fernanda Navarro and Theresa Piontek, are also ranked in the top 75 of the ITA singles poll. Navarro, a native of Guadalajara, Mexico, is 59th after finishing the fall season with an 11-2 record in singles play. Piontek, who hails from Eltville, Germany, is 72nd in the singles rankings after going 5-6 in the fall, including a win over a top-30 singles player from Georgia.

Eidukonyte and Piontek are ranked 20th in doubles according to the ITA. The pair was 4-1 in fall doubles play, and advanced to the finals of the ITA Carolina Regional, defeating the No. 1 and No. 4-seeded teams in the draw before falling in the title match.

Clemson is ranked 20th in the team rankings released by the ITA. Last spring, the Tigers finished the season ranked 18th nationally after going 18-10 and reaching the NCAA Sweet 16 before falling to eventual National Champion Vanderbilt. Three players from the 2015 team return to Head Coach Nancy Harris’ squad for 2016 – Eidukonyte and fellow senior Tristen Dewar, as well as sophomore Daniela Ruiz– while the Tigers’ roster features five newcomers.