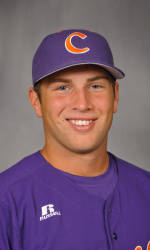 Daniel Russell scored on a wild pitch with two outs in the eighth inning and Eastern Michigan hung on for a 7-6 win over #4 Clemson in front of 5,407 fans at Doug Kingsmore Stadium on Saturday afternoon. The Eagles, who evened the series 1-1, improved to 1-1 on the season, while the Tigers fell to 1-1.

Eastern Michigan scored three runs in both the second and fourth innings to build a 6-0 lead. The Tigers chipped away with two runs in the fifth inning, three runs in the sixth inning, and a run in the seventh inning to tie the score. But Russell’s go-ahead run on a wild pitch in the eighth inning proved to be the difference.

Corey Chaffins (1-0), the fourth of four Eagle hurlers, earned the win, as he allowed two hits, one run, and two walks with two strikeouts in 3.1 innings pitched. Freshman Kevin Pohle (0-1) suffered the loss in his first career outing despite pitching 3.2 effective innings out of the bullpen. He yielded just one run and no walks.

The Eagles grabbed the game’s first lead in the second inning. Ben Magsig led off with a walk and Zack Leonard followed with a long two-run homer to left field, his first long ball of the season. Robert Wendzicki singled to left-center and advanced to third on Russell’s double to right field. Two batters later, Kyle Klein lined a sacrifice fly to left field to plate Wendzicki, giving Eastern Michigan a 3-0 lead.

Eastern Michigan doubled its lead in the fourth inning. Leonard led off with a single up the middle and Wendzicki followed with a walk after being down in the count 0-2. Russell then lined a single to center to score Leonard and Matt Hitt moved the runners up a base on a sacrifice bunt. Klein plated Wendzicki and Russell with a double to right-center.

The Tigers dented the scoreboard with two outs in the fifth inning. Chris Epps walked and Will Lamb popped up for out #2, Jeff Schaus belted a single to right field to score Stolz and advance Epps to third. Epps then scored on a wild pitch.

Clemson cut further into the Eagle lead in the sixth inning. John Hinson laced a one-out double to right-center and went to third on Phil Pohl’s single through the left side. Kieboom then lofted a double to left-center off the glove of centerfielder Brent Ohrman to score Hinson and Pohl. With two outs, Epps, Lamb, and Schaus walked, as Schaus’ walk plated Kieboom.

In the seventh inning, Brad Miller led off with a walk and advanced to second on Hinson’s foulout. After Miller stole third on an 0-2 pitch, Pohl laced a 1-2 breaking ball up the middle for a single to plate Miller and tie the score.

The Eagles regained the lead in the eighth inning. Russell led off with a double to center. After the next two Eagles were retired, Russell scored on a wild pitch from Alex Frederick on a 1-2 pitch in the dirt to give them a 7-6 lead.

In the ninth inning, Miller led off with an infield single to second. Leonard’s throw from the right side of the infield was errant and was headed into the Tiger dugout, but the ball hit the screen in front of the dugout and caromed back towards first base, keeping Miller at first base. Hinson hit a sharp grounder, but it was right at Klein at first, who threw to second to retire Miller. Pohl then hit a towering flyball to deep left field, but unlike earlier in the game when the wind was blowing out, the wind was blowing in and allowed Russell to record the second out near the fence. Kieboom followed with a hard liner that hit off Chaffins’ body. The righthander picked up the ball on the mound and threw to first for the game-ending out.

Russell went 4-for-4 with two doubles, two runs, and an RBI to pace Eastern Michigan, who outhit the Tigers 11-9. Leonard and Wendzicki both added two hits and two runs apiece, while Klein had a game-high three RBIs.

Kieboom went 3-for-4 with a double and RBI, while Schaus went 1-for-2 with two RBIs, two walks, and a hit-by-pitch. Clemson put 19 batters on base thanks in part to nine hits and eight walks, but the Tigers stranded 11 runners on base compared to seven by the Eagles.

Clemson and Eastern Michigan will play the series-finale of the three-game series on Sunday at 1:00 PM.