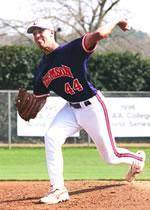 Zach Schreiber (5-4) allowed just three hits (all in the second inning) and one run to earn the win. He also struck out seven and walked four. Schreiber kept the Tiger batters off balance all game in throwing 127 pitches, a majority which were breaking balls. Danny Otero got the last two outs and picked up his fourth save of the season. Robert Rohrbaugh (4-5) was the tough-luck loser. He pitched the Tigers’ first complete game of 2004. In 8.0 innings pitched, he allowed two runs, five hits, and one walk while striking out six.

Thanks to two infield singles, Clemson took a 1-0 lead in the second inning. Kris Harvey beat out a ground ball to shortstop and went to third on Andy D’Alessio’s double down the right-field line. After Tyler Colvin struck out for out #2, Russell Triplett beat out another single, this time a slow chopper to third base. Harvey scored on the play. It would be the Tigers’ last hit of the game.

Duke finally broke through with its first hit of the game in the fifth inning. Bryan Smith hit a slow roller through the left side for the team’s first hit. Baumann then hit the first pitch he saw just over the fence in left field for a two-run homer, his third of the season. Baumann did not even start game one of the series Thursday and entered the game with just 40 at-bats. It was also just the second homer Rohrbaugh allowed in his career.

It looked like Clemson would breakthrough in the ninth when Brad McCann led off the inning with a deep fly ball to left-center. But as the wind kept the ball in the park, Jonathan Anderson made a leaping catch and banged into the wall, but held on to the ball. It was the sixth ball the Tigers hit hard to the outfield that was caught, as Clemson did not have a hit that landed in the outfield. Lou Santangelo followed with a walk and Garrick Evans came on to pinch-run. On a 3-2 pitch, Harvey followed with another walk. After Schreiber was relieved by Danny Otero, D’Alessio struck out swinging on a fastball on the outer half. Colvin then flew out to right-center to end the game.

Baumann led the Blue Devils with two hits in three at-bats, while Clemson totaled just three hits, all in the second inning. Clemson was 1-for-7 with runners in scoring position, while Duke did not even have an at-bat in that situation. In fact, Rohrbaugh allowed just two baserunners to reach second base all game, both of which scored on Baumann’s homer. Clemson left six runners on base, while Duke left just two. Neither team committed an error as well.

The two teams will conclude the series and regular season Saturday at 1:30 PM at Jack Coombs Field.